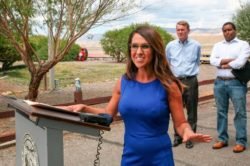 This battle between Representatives Omar and Boebert has been fun to watch, but I am not sure it will end well. I need to state that I am a fan of Rep. Lauren Boebert. I like her views, energy, honesty, and spunk. I think she is a patriot and a breath of fresh air in Congress. I also need to stipulate that I am not a fan of Rep. Ilan Omar. I think she hates this country that gave her such an opportunity. She has gone from being a refugee from Somalia to being a part of the Congress of the greatest nation on Earth. She is an anti-Semite and has not been accountable for the many offenses she has been accused of—these range from immigration fraud to tax fraud and misuse of campaign funds. Now she has the gall to expect accountability for one of her colleagues.

Rep. Boebert may have crossed the line when she called Omar, The Jihad, possibly equating her to a suicide bomber. Apparently, the comments hit close to home, as they should have, as Omar has been calling for a public apology and action against Boebert by the Republican leadership. Right now, she is getting neither.

Boebert reached out to Omar by phone with the hope of putting this episode behind them. The effort failed. When Boebert refused to make a public apology, the conversation soured, Omar hung up, and the feud continues. This catfight does not deserve time on the House floor or action by the leadership of either party.

This battle of two strong women is symbolic of the division between government and America. You have Omar, the poster child for the Progressive Left. She hates America, wants to transform America, and you wonder why she is in Congress. Boebert is the polar opposite of Omar. She loves America, is a strong advocate of the second amendment, believes in individual rights and small government.

There will be no apology that will satisfy Omar. She wants to destroy Boebert. She would be happy if the Republican leadership censored her and called for a recall election to find her replacement. That is the Left. Cancel and eliminate anyone who disagrees with you. No debate, just elimination.

We have had plenty of instances in the recent past of Democrats, specifically the Squad, saying something derogatory about a person or group. There has been little accountability for such actions. Omar has been scrutinized often. Her comments about Israel and Jews reinforce her hatred for the Jewish people. She supported BLM and the riots of 2020 while pushing for defunding of the Police. There is evidence that she married her brother to scheme the immigration system, possible tax fraud, and misusing campaign funds.

Omar has much to answer for and to apologize for. She is the poster child of who should not be in Congress. When she squares these issues with the American public and reconciles her feelings about America, she can insist on public apologies. Until then, she best takes another phone call from Boebert, graciously accepts the apology, and doesn’t hang up until she says goodbye.

Syndicated from Conservative View From New Hampshire with permission.

Disagreement is Not Bigotry or Hate is posted on Conservative Daily News – Where Americans go for news, current events and commentary they can trust – Conservative News Website for U.S. News, Political Cartoons and more.