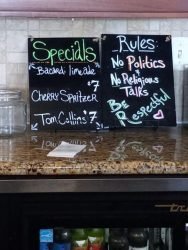 Here’s a sign I saw in a hotel bar recently. 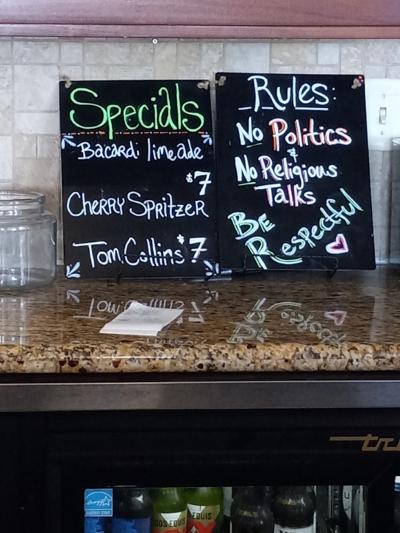 Yes, this is a private business, albeit a huge hotel chain, but I doubt they would have allowed such a sign ten or even five years ago.

Leftists would never be caught dead defending the rights of a private business, but today, they’re the first to speak up for them so long as they’re doing the bidding of the government.

Yet another modern irony…if they’re doing the bidding of the government how private are they?

A young woman at the reservation desk defended the sign and the policy saying that some people get drunk and rowdy at the bar.

So, rather singling out and dealing with those out of control patrons,  it’s necessary to make blanket rules that apply to everyone.  So much for personal responsibility.

The implication is that no one can discuss controversial subjects without becoming unruly. Acceptance of such dictates will create exactly that reality because people will have forgotten how.

The hotel chain is acting as a proxy for the current government once again since collectivist conditioning is exactly what they want.

Before you know it, there will be rules for speech, where to stand, which way to walk, and whether you can enter a business without the right papers…  Wait a minute…

We are watching a mass cultural psychosis where people are cheering the muzzling (jabbing and persecuting) of their fellow citizens.

The bell tolls for them as well. They just don’t know it yet.

Ever seen a sign like this in a hotel bar? is posted on Conservative Daily News – Where Americans go for news, current events and commentary they can trust – Conservative News Website for U.S. News, Political Cartoons and more.