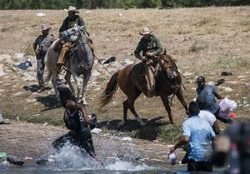 Let us talk about a story where much of the discussion has already been shown to be false. It was bad enough when people like Don Lemon, Chris Cuomo, and Joy Reid took one image from the Border disaster and turned on our brave Border Guards. But now we have the President, Vice President, and members of Congress showing they can be just as stupid as the talking heads of the Main Stream Media.

In a classic case of nothing to see at the Border, look at how those evil Border Guards on horseback are treating these poor Haitian refugees. There are so many falsehoods in this story that maybe the double and triple negatives become the truth. First and foremost, the accusations that the Border Guards were using their horse reins to whip people trying to cross the Rio Grande have been debunked by many sources. I have never ridden a horse but have listened to enough experts in the last week to understand what we saw as the standard operating procedure for the Guards to maintain control of and protect their horses. This makes it clear how so many Democrats continue to preach the false narrative. They do not investigate a situation. They create a report that will benefit them regardless of being true or false. In this case, their story distracts from the reality of where all of the thousands of Haitians have been dispersed to.

The horses were being used, as they have since 1904 because they are the only mode of transportation that can navigate the terrain around Del Rio. Because of the false story being bantered about, the use of horses has been forbidden. As many as 15,000 Haitians lived in squalor under a bridge for weeks, and no Democrat spoke out about it. Have an image that you can create a story about slavery, and the Democrats will pounce on it. This free and easy use of relating random situations to slavery is insulting to anyone who endured the era of slavery and segregation in this country. Unfortunately, people like Maxine Waters, Al Sharpton, AOC, and the Squad, and most celebrities on MSM will always take the easy way out and use the Jim Crow talk track.

A closer look at the 15,000 Haitians gathered under the International Bridge shows they were not people from Haiti seeking political asylum. These people are from Chili, Columbia, and have been in Central America for years. The same is true for the 20,000 gathered Haitians now in Columbia and preparing to head for the U.S. These are not people seeking asylum due to unrest in Haiti. They are taking advantage of the open Border to use the Haiti situation to gain access to America. This whole mess is a conflagration of lies. The average news watcher will have a hard time filtering the lies to see the truth.

The tongue-in-cheek moment goes to Kamala Harris on the View when she claimed that someone has to be held accountable for the “HorseGate.” This empty pantsuit has accepted no accountability for the deplorable crisis at the Border, a Border Situation of which she is supposed to be in control. To that, we can all have a good chuckle.

Ban the Horses is Just a Distraction is posted on Conservative Daily News – Where Americans go for news, current events and commentary they can trust – Conservative News Website for U.S. News, Political Cartoons and more.