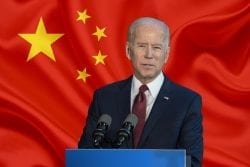 Republicans Sen. Tom Cotton of Arkansas and Rep. Mark Gallagher of Wisconsin sent a letter to the State Department warning of the security risks posed by foreign governments’ use of cloud services provided by Chinese technology company Huawei.

The letter, addressed to Secretary of State Anthony Blinken, expressed concerns regarding over 70 foreign governments’ and state-backed companies’ use of Huawei’s cloud infrastructure, which the lawmakers argued could be used by the Chinese government to spy on foreign countries.

The lawmakers cited Huawei’s e-Government Cloud, a package of services that help governments process sensitive information and manage elections, identification systems, tax services, and other functions as potentially exposing “Huawei’s clients to the prying eyes of the CCP.” The lawmakers argued this would put the entire political structure of a country using Huawei’s services in China’s “crosshairs.”

Huawei was previously found to have been helping African countries such as Uganda and Zambia spy on political opponents. The Federal Communications Commission labeled the Chinese technology company a national security threat in June 2020, banning Huawei from receiving agency funds, while the Department of Justice in January 2019 charged the company’s Chief Financial Officer Meng Wanzhou with several counts of fraud.

“This threat could manifest itself in the CCP’s access to the personal data of visiting U.S. citizens, service members, business persons, and diplomats,” the lawmakers wrote. “Such an outcome could severely disadvantage U.S. diplomatic, intelligence, and economic efforts and must be resisted accordingly.”

The lawmakers pushed President Joe Biden on what actions he was already taking to curb foreign governments’ use of Huawei services, and they questioned the administration on its relations with governments that contract with Huawei.

The State Department did not immediately respond to the Daily Caller News Foundation’s request for comment.