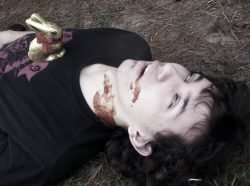 We have all heard the term “comorbidities” in conjunction with reports of deaths from Covid.  For many, this is a new, and not fully understood word.  It sounds frightening, especially when used in the context of a global pandemic. To get an idea of what it means and the context in which it is used, I’ve put together a short example to help clarify.

Most of us have heard the expression “death by chocolate“.  What if, though, that idea were taken seriously?   What if a government authority were to require that all death certificates list chocolate as the principal cause of death if, at any time in the months preceding death, the individual had consumed chocolate?

What if they required it when it was only suspected that the person had eaten chocolate?  Doctors could list all the other conditions that the individual suffered from as “comorbidities”.  These other conditions might include heart disease, stroke, drug overdose, diabetes, gunshot wound, traffic accident, suicide, suffocation, pneumonia, influenza, cancer, and many other conditions, any of which might well be lethal in themselves.  What if every individual listed with chocolate as the primary cause of death also had, on average, over 2.5 of these other conditions as well?

Would you believe that those deaths were actually a result of eating chocolate, or might you suspect someone was “fudging the data”, so to speak?  What if you knew that the authority that mandated the chocolate reporting had ties to an anti-chocolate group that was promoting a drug they claimed would prevent chocolate deaths?

I think most of us would want some sort of proof that chocolate was actually the cause of death. We might even ask what fraction of those reported deaths had only chocolate listed as a cause, just to get some baseline estimate of the lethality of chocolate.  There would be some inaccuracy with that approach, but at least we could rule out most of the confusion about possible deaths from other causes besides chocolate.  What if we found that only about 6% of the death certificates listed chocolate as the only cause?

Now that wouldn’t eliminate chocolate as contributing in the other cases, but it would set a reasonable bound on chocolate deaths given the high lethality of most of the other conditions.  We would likely conclude that even if chocolate were a contributing factor, it probably shouldn’t have been listed as the primary cause.  At worst, chocolate might only have been the last straw, rather than the first.

Now most of us would find the idea of chocolate as a major cause of death to be rather fantastic.  We would feel that someone was, as the saying goes, trying to pull a fast one on us.  We would know that while chocolate might have some negative effects, like acne, it probably was not the cause of massive death counts.

We would know because nearly all of us have experience with chocolate, have given gifts of chocolate to friends and loved ones, and have received such gifts ourselves.  We know chocolate as a tasty treat, and few would consider it lethal.  The whole situation would run counter to our own experience, so we would be inclined to reject any reports of the massive lethality of chocolate.

What if, though, instead of chocolate, a different cause were given, perhaps one suggestive of large-scale lethal events of history?  What if the alleged cause were something that only a few experts were familiar with and where there was much disagreement among those experts as to just how severe the cause might be?  What if the cause was something that most people could experience without even knowing?  What if among those who were more severely affected, the vast majority would recover with few or no consequences?

As it turns out, in March 2020, the US Centers for Disease Control issued a “chocolate” mandate where they required that Covid be listed as the primary cause of death if a Covid infection was even suspected in the preceding months.  Physicians were instructed to record Covid as the principal cause even if the ultimate cause was something else if a plausible argument could be made that a Covid infection led to the later cause.

That same list of comorbidities given for chocolate also applies to Covid deaths.  It seems difficult to see how a Covid infection could be listed as the principal cause of a gunshot death or a suicide, or a traffic accident, or a massive stroke.  Yet many of the apologist “fact checkers” and even some physicians have argued that those people would be alive today if they hadn’t had Covid and therefore any questioning of the severity of Covid is criminally irresponsible.

That such people would still be alive is in itself an amazing claim as even without Covid, large numbers of people are dying of those conditions every day.  In December of 2020, during the peak of the last wave of Covid, about 80,000 people were dying each week in the U.S.  However, even without Covid, about 65,000 people would have died of other causes in the same week.  In other words, over 80% of the deaths would have happened anyway.  In no way do I wish to minimize the tragedy of any death, but I take serious objection to the use of such tragedies to promote deception.

Given that in the same period, it has been claimed that suicides alone exceeded the deaths attributable to Covid – suicides largely as a result of lockdown depression, even among elementary-age children, is it even correct to attribute all those so-called “excess deaths” solely to Covid?  Likely many of them could more rightly be attributed to “confinementitis” or “lockdown fever” as much as they could to Covid. Even if the suicide rate did not exceed Covid rates, the fact that several people who committed suicide were isolated and depressed as a result of lockdowns is significant and should have been an avoidable factor.

Iatrogenics refers to situations when a doctor’s treatment causes more harm than good.  We perhaps need a similar term for harm caused by politicians.  Any good Greek scholars out there?

Add to that all those who had serious conditions but were afraid to seek medical assistance or treatment out of fear of contracting what so many “authorities” were portraying as a highly lethal disease, akin to smallpox or the Spanish Flu.  It is now well established that their reluctance often led to their death from lack of timely treatment.  We have no idea of what were the real causes of those “excess deaths”.

Yes, some people actually died of Covid, often in terrible suffering, but all of them?  Why did the CDC force the mandate that only acted to obscure the true cause of death?  Was it simple incompetence and failure to think things through?  Were they acting under a directive from others in authority above them?  Were they misguided by public authority figures who were as ignorant as they were themselves, but who could speak with unwarranted, but convincing, confidence?  We may never know.

Further, many, if not most, of the deaths were among the most elderly, among those who had already lived well beyond their life expectancy, and where mortality rates are already high.  How many of these were confined in the Covid incubators known as nursing homes succumbed, especially when effective therapies were denied them because of political circumstances?  How many of these, when confronted with isolation and denied the comforting presence of children and grandchildren and loved ones by the politically imposed lockdowns, simply gave up as having no motivation to continue?

How many deaths would have been attributed to Covid if we had not had the CDC mandate?  Would there have been as much public concern about Covid if there were only 30,000 deaths instead of 500,000?  Would we have ceded so much power to authorities if some other cause of death had been listed, with Covid simply a coincidental or contributing factor?

Is someone encouraging and exploiting fear of something unfamiliar and threatening in order to manipulate people?  Is the fear justified, or is it manufactured to serve another purpose?  Would some groups have attained as much power, and others as much wealth, as they have if it were realized that death by Covid was more like death by chocolate?  Would we have such a push to force questionable “vaccines”  on an unwilling populace?

Covid Comorbidities And Death By Chocolate is posted on Conservative Daily News – Where Americans go for news, current events and commentary they can trust – Conservative News Website for U.S. News, Political Cartoons and more.