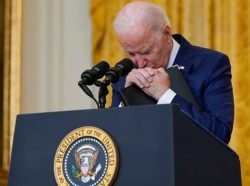 For the last 20 years, the generally understood meaning of the term “Never Forget” was a reminder to keep the 9-11 world trade Center in mind so it would not happen again.

But with an idiot like Joey Biden in the White House it’s become necessary to re-imagine the phrase with Weepy Joey in mind:

The original intent of the “never forget” phrase was to keep America on guard against further attacks like 9-11, and it’s self-centered people like Joey Biden who consider their meaningless political objectives and personal aggrandizement to be more important than our national defense.

With Joey Biden As President, The Term “Never Forget’ Takes On A Whole New Meaning is posted on Conservative Daily News – Where Americans go for news, current events and commentary they can trust – Conservative News Website for U.S. News, Political Cartoons and more.

Left of the Border

Playing God: The Deadly Fruits Of Media Censorship Of Conservatives

Left of the Border

Playing God: The Deadly Fruits Of Media Censorship Of Conservatives