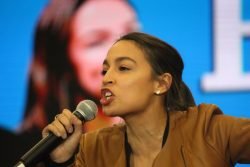 As usual, there was no shortage this week of candidates for our weekly award. Ultimately, however, the decision was an easy one, with the estimable Rep. Alexandria Ocasio-Cortez (D-NY) taking the honors. Our current format in bestowing this dubious prize is relatively new, but we can safely assume that while this may be AOC’s first time winning the award, it likely won’t be the last.

What began as “political correctness” has evolved into “wokeness,” and there have certainly been bizarre examples of the phenomenon along the way, with the silliness often being raised to new levels as leftwing whack jobs play their inane game of one-upmanship. “Any stupid thing you say, I can say something stupider.” And as the idiocy has progressed, the one territory of leftist fantasyland that has produced the most laughable and ridiculous examples has undoubtedly come from the hug-a-transgender-person crowd.

We’ve become accustomed to nonsense such as their attempt to shut down the word ‘handicapped’ in favor of ‘handi-capable.’ We chuckled when they tried to retire the use of the word ‘genius,’ opting for their participation trophy mindset by insisting that calling some people a genius would be insulting to those who weren’t… and FYI, only a non-genius would object to using the word genius. And we just smiled and shook our heads at that goofball from the north, Canadian Prime Minister Justin Trudeau, when he scolded a young woman for using the word ‘mankind’ by explaining, “we like to say ‘peoplekind,’ not necessarily ‘mankind.’” But buffoons such as AOC with their stunning confusion over the simple concept of gender are taking the absurdity to a new level.

The geniuses over at Disney and Marvel comics (Did I just use the word genius? Sorry about that) chose to create a couple of so-called ‘non-binary’ characters named Snowflake and Safespace (and no, I’m not kidding). Earlier this year, we had the woke mob coin the term ‘Birthing Persons Day’ to be used instead of ‘Mothers’ Day.’ But leave it AOC to raise the brainlessness bar yet again.

During an interview on Tuesday with CNN, naturally, AOC was discussing the controversial Texas abortion law, and gave us this beauty when referring to Republican Governor Gregg Abbott, “I don’t know if he is familiar with a menstruating person’s body.”

The congresswoman, who likes to portray herself as a staunch feminist, apparently misses the irony of her statement. If you’re trying to defend a woman’s so-called right to an abortion AOC, it would probably help if you actually called that person a woman. And if there is indeed no such thing as gender, and if we must pretend that anyone can menstruate, how do you know that Governor Abbott can’t menstruate? Are you stereotyping him based on the way he looks? Are you a man-phobe? Or perhaps you’re making an assumption that Abbott is incapable of menstruating because he’s handicapped and in a wheelchair? Or should I have called Abbott handi-capable?

While struggling to continually up-the-ante on victimhood, and while trying to sort out which groups fall under what victim category, arguments like those from AOC aren’t just incoherent or peculiar, they’re asinine.

But as imbecilic as AOC’s comment was, her follow-up tweet retaliating against the abuse she received as a result may have been even more so. Shortly after CNN aired AOC’s interview, she tweeted the following, “Trans, two-spirit, and non-binary people have always existed and will always exist. People can stay mad about that if they want, or they can grow up.” Forget about her point on ‘two-spirit,’ because I have no idea what the hell she’s talking about, but instead focus on her point about being mad. You have to give AOC credit for transparency. She’s clueless, and she doesn’t care if you know it. What other reason would explain her reaction?

No, AOC, those of us who mocked you aren’t mad about what you said. We’re not angry with those who think there are more than two genders, and that men can be women and women can be men. There’s no fury, there’s no rage. We’re laughing at you, and in some cases we even pity you. You’re overthinking things congresswoman. Keep it simple. You think any woman should be able to kill her unborn child at any time during her pregnancy. Say it loud, and say it proud. And don’t try to confuse things with the transgender folly… at least not until you have a better handle on how to get your message across.

between SCOTUS and GOP

The Russia Hoax targeting President Trump left a lasting impression on Nitwit Nicolle. In fact, she learned a new word: collusion. And she also learned about a new person: Robert Mueller. Wallace this week suggested that it be Mueller who investigates potential collusion of the Supreme Court with Republicans due to SCOTUS’ recent refusal to shut down Texas’ controversial abortion law. Because, you see, Nicolle Wallace doesn’t like that law, and in Wallace’s tiny brain, whenever something happens that she doesn’t approve of, there’s collusion. And if someone is going to investigate collusion, it needs to be Robert Mueller. Spoiler alert: When the economy tanks due to President Biden’s awful policies, Nicolle Wallace will demand Mueller investigate collusion between supply and demand.

Portland has descended into such chaos over the past eighteen months, there are days when it looks more like Kabul, Afghanistan than it does the formerly splendid City of Roses. We’ve all seen the footage of the battles between leftwing and rightwing groups, Antifa and the Proud Boys, but apparently Democratic Portland Mayor Ted Wheeler has not. On Wednesday, such groups battled once again, only this time Wheeler ordered police not to interfere with the oppositional ‘protesters’ and to stand down. Predictably, the situation deteriorated with police finally becoming involved only after gunshots erupted. Wheeler later explained, “It is clear based on the public outcry, on the media outcry on the national front, that that strategy was not the right strategy.” And therein lies the problem folks. Timid Ted didn’t come to the realization that he’d made a mistake based on his own deductions. Nope. He had to rely on public outcry to point out that he’s a nincompoop. How did anyone vote for this guy?

Knucklehead Of The Week: You Know Nothing About “A Menstruating Person’s Body” is posted on Conservative Daily News – Where Americans go for news, current events and commentary they can trust – Conservative News Website for U.S. News, Political Cartoons and more.