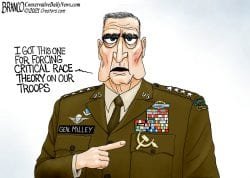 Chairman of the Joint Chiefs of Staff Gen. Mark Milley refused to answer questions about “white rage” during a Wednesday press conference.

Miley said he avoided discussing the topic because it is “very complicated,” according to video of the press conference.

“I think it’s a very complicated topic and we don’t have the time to go into the nuance of it right this minute,” Milley said. “I can do that later. I’d be happy to do that later, but right now is not a good time to do that.”

NOW – General Milley won’t discuss "white rage" while he's on camera, because it is a "too complicated" topic, but later. pic.twitter.com/73bdexDLjd

The high-ranking military official has previously expressed support for Critical Race Theory (CRT) in the military and said he wanted to understand “white rage” in an effort to stamp out racism from the ranks of the United States military during testimony last month. Milley was questioned about the military’s adoption of CRT by Republicans in the House Armed Services Committee.

“I do think it’s important for those of us in uniform to be open-minded and be widely read … It is important that we train and we understand,” Milley said at the time in regard to CRT. “I personally find it offensive that we are accusing the United States military, our general officers … of being ‘woke’ or something else because we’re studying some theories that are out there.”

Critical Race Theory holds that America is fundamentally racist, yet teaches people to view every social interaction and person in terms of race. Its adherents pursue “antiracism” through the end of merit, objective truth and the adoption of race-based policies.

Gen. Milley Refuses To Get Into Details About ‘White Rage’ Because It’s Too ‘Complicated’ And Nuanced For Press Conference is original content from Conservative Daily News – Where Americans go for news, current events and commentary they can trust – Conservative News Website for U.S. News, Political Cartoons and more.