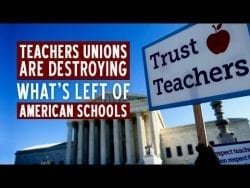 The US Centers for Disease Control and Prevention (CDC) was preparing to release school reopening guidelines in February suggesting that in-person learning would be acceptable even if a community had high coronavirus case rates. After a meeting with the American Federation of Teachers (AFT), the nation’s second-largest teachers union, the CDC allegedly backpedaled and revised their guidelines about in-person instruction, using wording provided by the AFT.

The New York Post broke the story on Saturday using emails received through a Freedom of Information Act request from Americans for Public Trust, a non-profit organization focused on government accountability.

According to the Post, the CDC guidelines for in-person learning were changed after a lengthy email exchange and a call with AFT representatives. Instead of allowing for in-person schooling regardless of community COVID-19 case levels, the modified guidelines indicated that high virus transmission rates could prompt an update of CDC guidelines.

The teachers union also lobbied the CDC to include wording that would allow “high-risk” teachers to work remotely, as well as teachers and staff who live in a household with a high-risk person. Some of the AFT’s suggested language was incorporated almost word-for-word into the February 12 CDC statement on school reopening plans.

“Thank you again for Friday’s rich discussion about forthcoming CDC guidance and for your openness to the suggestions made by our president, Randi Weingarten, and the AFT,” said one email by AFT representative, Kelly Trautner, to the CDC.

The emails between AFT and CDC staff members, some of which were forwarded to CDC Director Dr. Rochelle Walensky, indicate that the teachers union referred to the CDC as its “thought partner,” and a call was scheduled in early February between Walensky and Weingarten prior to finalizing the CDC statement.

Backroom dealings between a powerful government agency and a powerful public-sector labor union are concerning, particularly in this case when the federal government, working through the CDC, has so much power over education policy. As the economist F.A. Hayek said: “Once wide coercive powers are given to government agencies…such powers cannot be effectively controlled.”

Yet another illustration of why states, districts & schools should have made their own decisions, not waited for the feds. And many did https://t.co/kkxSBb879m via @nypost

The CDC and Walensky, who warned of “impending doom” throughout the country on March 29 due to coronavirus case counts, may have instead facilitated “impending Zoom,” as teachers unions continued to block school reopening plans and many students learned remotely. Indeed, as of April 19, only 47 percent of US public school districts were open for full-time, in-person learning, with most of the remaining districts operating on a hybrid model with some in-person and some remote learning.

Research over the past year has found that teacher union influence, more than any other factor including community virus transmission rates, determined whether or not a school district reopened for in-person learning. In their March 2021 paper in Social Science Quarterly, Corey DeAngelis and Christos Makridis concluded: “Our findings that school closures are uncorrelated with the actual incidence of the virus, but are rather strongly associated with unionization, implies that the decision to close schools has been a political—not scientific—decision.”

More parents may be discovering just how political school reopening plans actually are, particularly as they learn how connected the major teacher unions are to the Democratic Party and its platform.

According to EducationNext, the nation’s two top teachers unions have been among the leading financial contributors to national elections since 1990: “They have forged an alliance with the Democratic Party, which receives the vast majority of their hard-money campaign contributions as well as in-kind contributions for get-out-the-vote operations.” Teachers union members comprise 10 percent of the delegates at the Democratic National Convention, where they represent “the single largest organizational bloc of Democratic Party activists.”

Local teachers unions have also pinned their school reopening negotiations on the approval of a variety of progressive policies, including most recently the Los Angeles teachers union gain of child care subsidies for teachers and staff.

In California, where many schools have only just begun to reopen, many parents removed their children from an assigned district school for private education options. The Associated Press recently reported that public school enrollment in California dropped by 160,000 this academic year, which is “by far the biggest decline in years.” Other states have seen similar public school enrollment dips this year as parents choose private schools or homeschooling.

Not surprisingly, support for school choice policies continues to soar. According to findings from a RealClear Opinion Research survey released last month, 71 percent of US voters back school choice and 65 percent support parents using some per-pupil education funding for private options if public schools don’t reopen for full-time, in-person learning. School choice legislation continues to be introduced in the majority of states across the country, and some state bills have recently passed that dramatically expand parental choice in education.

With fall schooling plans still murky in many places, and teachers unions establishing more reopening contingencies for the 2021/2022 academic year, many parents are delaying kindergarten enrollment or seeking other education options for their children.

Faced with “impending Zoom” in district schools, parents are increasingly opting out.