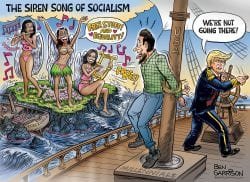 It’s always funny when some of the most prominent, self-described socialists in America leverage their advocacy for socialism into becoming multi-millionaires. (I’m looking at you and your three houses, Bernie Sanders).

The latest example of this comical yet revealing pattern comes courtesy of the Seattle City Council. The body is composed of left-wing politicians, many of whom openly embrace the socialist label. We’ve previously covered their efforts to punitively tax businesses, decriminalize property theft, and more. But as it turns out, City Councilmembers Kshama Sawant and Tammy Morales are collectively worth $3.5 million!

NEW: Seattle Socialists Kshama Sawant and Tammy Morales on the City Council have taken advantage of our capitalist system, getting wealthy off the low-income voters they claim to fight for. They’re collectively worth over $3.5 million. https://t.co/soonN5Xmx5

“At one point, Sawant vowed to only accept an ‘ordinary worker’s salary’ for her work of about $40,000,” Rantz continues. Here’s the twist: She promised to “donate the remainder to the Kshama Sawant Solidarity Fund,” but “the majority of the donations made its way back to Sawant via Socialist Alternative. [Seattle City Council Insight] called this scheme ‘laundering’ in 2017, though noted it’s legal.”

Meanwhile, Rantz notes that Councilmember Tammy Morales is worth a whopping $3 million.

This story is more than just an opportunity to criticize some politicians for hypocrisy. It demonstrates a timeless principle of public choice economics. The short version of public choice theory? It’s a fundamental mistake to assume that while individuals in the private sector are motivated by self-interest and profit, individuals in the public sector are motivated by altruism and the public interest.

In reality, the same rules apply—even for “socialists.”

What If the Media Had Told the Truth? Five MSM Lies for Which Trump Has Been Vindicated, and the Damage They Caused