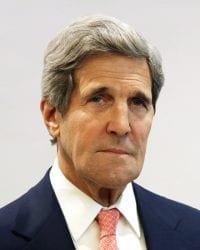 The level of sensitivity of the information is not clear from the Zarif recording, which was first reported by Iran International and picked up by the Times.

“Former Secretary of State John Kerry informed him that Israel had attacked Iranian interests in Syria at least 200 times, to his astonishment, Mr. Zarif said,” the Times reported.

The revelation drew allegations that Kerry had sold out Israel to his Iranian counterpart.

“John Kerry was ratting out Israeli covert operations in Syria directly to the Iranian foreign minister,” Noah Pollak, the executive director of the Democratic Alliance Initiative, said on Twitter.

John Kerry was ratting out Israeli covert operations in Syria directly to the Iranian foreign minister. Let that sink in. Wow. https://t.co/lmzhamTWFf pic.twitter.com/DzMAHAJeGy

It is unclear from reports of the Zarif tape whether the Israeli strikes were covert missions. But according to Zarif’s telling, he was not aware of the attacks prior to Kerry’s disclosure.

Iran International, which is based in London, downplayed Zarif’s remarks, saying that Israel’s attacks in Syria had been reported in the international press in 2017.

The National Security Council referred The Daily Caller News Foundation to the State Department for comment about Zarif’s remarks. The agency did not respond to a request for information on when Kerry would have shared the information with Zarif and whether the information was classified.

The Boston Globe reported in May 2018 that Kerry had met with Zarif months earlier to strategize on salvaging the deal, which Kerry helped push through during the Obama administration.

Kerry told radio host Hugh Hewitt in September 2018 that he had met in person with Zarif “three or four times” since leaving office.

He denied in the interview that he had “coached” Zarif on how to deal with the Trump administration on the Iran nuclear deal.

“What I have done is tried to elicit from him what Iran might be willing to do in order to change the dynamic in the Middle East for the better,” Kerry said in the interview.

President Donald Trump suggested that Kerry may have violated the Logan Act by discussing the nuclear deal with Zarif.

Zarif made other explosive revelations in the interview, which was conducted with Iranian journalist Saeed Laylaz.

According to Iran International, Zarif alleged that Qassim Soleimani, the former commander of Iran’s Revolutionary Guards Corps’ Quds Force who was killed in a U.S. airstrike last year, worked with Russia to undermine Iran’s nuclear agreement with the West. He also said that the Revolutionary Guards are largely in charge of crafting Iran’s foreign policy.