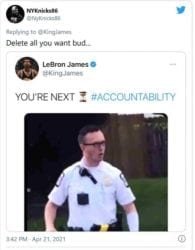 On Tuesday, the jury in the Derek Chauvin trial for the death of George Floyd delivered a verdict of guilty on all charges: second-degree murder, third-degree murder, and manslaughter.

A young black woman named Ma’Khia Bryant was killed by Columbus, Ohio police on Tuesday after having charged at two other black women with a large knife while ignoring the officer’s repeated demands to “Get down!” Basketball buffoon LeBron James weighed-in on the incident with a tweet of a picture of the officer and the text, “You’re next!”

Rep. Liz Cheney (R-WY) will be facing a serious challenge from other Republicans in her primary bid for reelection next year, and the list of challengers could include a key, former Trump official.

President Biden will announce a proposed increase to our capital gains tax, almost doubling the rate for those who make over $1 million per year.

The House of Representatives voted on Thursday to give statehood to Washington D.C., in a vote entirely along party lines; 216-208. Not a single Democrat voted against the bill, and not a single Republican voted for it.