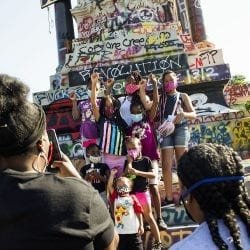 The country continues to be plagued by violence and unrest facilitated by the false narrative of ‟systemic racism,” this lie advanced by the charlatan Marxists behind Critical Race Theory. And if the majority of Americans who now recognize CRT as a lie don’t start standing up for true anti-racism, our cities will continue to burn.

Thursday, a violent and destructive mob of BLM protesters executed an assault on Columbus Circle in Manhattan’s Central Park where they defaced the circle’s monument to the USS Maine with graffiti promoting their special kind of totalitarian anti-law enforcement racism. Six people were arrested and charged with assault and damage to public property, among other charges.

The New York Police Department released video afterward showing Black Lives Matter- and Antifa-affiliated slogans such as “ACAB” spray-painted on the monument. The acronym stands for, ‟All Cops Are Bastards.”

In Oklahoma on Wednesday, another group of ignorant, malcontent BLM activists stormed Oklahoma’s House of Representatives to protest Republican-backed bills that protect innocents from the criminal actions of protesters during unlawful assemblies. The measures included protections for motorists who inadvertently cause harm to rioters or protesters who – by their illegal blocking of roadways – put motorists’ lives at risk.

Another bill the protesters cited was a measure that aimed to protect law enforcement officers and their families from “doxxing.”

The Oklahoma House was momentarily forced to come to a halt after more than two dozen BLM activists occupied the fifth-floor gallery while it was in session, chanting, “We will use our voices to stand against corruption,” “No justice, no peace,” and “Stand united against all hate.”

In Minneapolis, the epicenter of the genesis for the current round of race-based action, protesters have occupied the George Floyd “autonomous zone” for nearly a year, refusing to leave unless a list of 24 demands is met, among them:

These demands among several others.

Meanwhile, Black business owners in ‟The Square” say they are in desperate need of help from police as businesses operating on the corner of 38th Street and Chicago Avenue are struggling to stay open due to rampant crime which has spiked since the occupation of the intersection.

Local governments – some opportunistically and others through ineptitude – have ceded the upper hand to these violent and seemingly empowered protesters; they have facilitated and unaccountable lawlessness in their streets and lawlessness they cannot quell.

And because the media has fallen for the false narrative of ‟systemic racism” and is all-in on Critical Race Theory, many people who have recognized the lie of it all are pressured to either abandon what they know to be true, or remain silent.

As I wrote in Why the Chauvin Verdict Won’t Stop the Urban Insurrection,

‟The false narrative of ‛systemic racism’ in law enforcement where the Black demographic is concerned is a falsehood that preys on emotion to achieve a continual divide among the races.

‟Of the 14 incidents in 2019 where unarmed Black men were shot and killed by police, several involved high-speed car chases, fights with officers, or had weapons recovered at the scene.

‟Additionally, crime victimization statistics compiled by the Bureau of Justice in 2019 revealed that those who commit violent acts tend to commit them against members of the same race as the offender. Black violent crime offenders targeted Black victims in 70 percent of incidents.”

Yet BLM activists are playing the part of ‟useful idiots” perfectly for the transformative Progressives and Oligarchs, who need a deep division to fester in the American people if their attempt to transform the United States away from the Constitution and Bill of Rights is to succeed to their desired end game: a country ruled exclusively by oligarchs and kowtowed to the agenda of the global elite.

We who are awake – not ‟woke” – need to take a stand against the lie that is ‟systemic racism.” We must push back – in concert and individually – against the advancement of Critical Race Theory, which in and of itself is simply a 21st Century version of classic Marxism disingenuously pitting the minority races against the majority White demographic when, in reality, we are all Americans; all one race, the Human Race.

Edmund Burke said it best when he said, ‟The only thing necessary for the triumph of evil is for good men to do nothing.” Don’t do nothing.

‟I have a dream that my four little children will one day live in a nation where they will not be judged by the color of their skin but by the content of their character.”
– Martin Luther King, Jr., August 28, 1963

The Destructive & Arrogant Ignorance of the Black Lives Matter Movement is original content from Conservative Daily News – Where Americans go for news, current events and commentary they can trust – Conservative News Website for U.S. News, Political Cartoons and more.