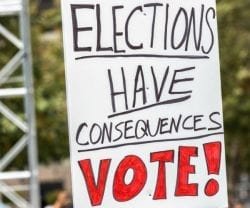 I am not sure what you thought would happen, but look around. Was it worth it? Do you feel good about yourself? I can’t help but think that the current, ruinous administration could have been avoided were it not for your self-righteousness in the voting booth. But here we are, dealing with the dissolution of biology, the promotion of corrupt, bigoted, and mentally ill government officials, a flaccid foreign policy, Supreme Court packing, an invitation to fiscal apocalypse, and unabashed totalitarian tendencies.

What did Trump do that was so offensive to your enlightened senses again?

The myopia of your ballot casting is nearly ineffable. Myopia implies limited vision, but vision nonetheless; you presented with none whatsoever. In what world does it make sense to accept four years of bombastic rhetoric for four years of hateful, divisive rhetoric? Oh wait, you actually thought Biden would unify everyone. Unity, conformity – same difference, right?

You didn’t like Trump, so you let someone worse win. Is that the extent of the thought process? Instead of condoning tweets, you’re condoning federal dollars being used to murder innocent babies in utero, advancing the horrendous lie that America is a racist and unworthy country, and endless other treasures? I just want to make sure I understand you. I mean, I can’t, but at least help me understand the spark that your two brain cells produced after rubbing together.

Enlighten me, please, about how ousting Trump in favor of Biden made the country a better place. I’ll wait. While I do, here is a short list of some monumental accomplishments that my guy had. He had foreign policy wins like standing up to China, signing not one, but four, unprecedented peace deals in the Middle East, shutting down Iran, silencing North Korea, moving the Israeli U.S. embassy to Jerusalum, and closing the spigot of wasted dollars going toward the WHO, NATO, and Paris Climate Accords. See that list? That’s just off the top of my head on foreign policy; I didn’t even get to the domestic victories yet, like lowering taxes, enabling businesses to thrive, and getting the government out of the way as he created the lowest unemployment for every category in recorded history in a booming economy. He exposed the media and political class as the Mos Eisley of elites; a wretched hive of scum and villainy.

Every day, I asked people these past four terrific years how the Trump administration was anti-gay, anti-woman, anti-immigrant, or anti-anything. I never got a response. He’s…mean! He…retweets! Walls might have been xenophobic when he constructed them but they’re okay again now. Cages and kids and all that? Nothing to see here.

Think about this for a moment. If you were gay, you thrived economically and enjoyed unparalleled freedoms. Trump even appointed the first-ever openly gay cabinent member. (I don’t care, but that’s important to the side you tacitly supported). Seems like a good deal. Now, the gay community still enjoys the same stuff, but with a little less freedom than before. See what I am getting at?

The same was true if you were a woman. Name a single woman who was oppressed, repressed, whatever under the Trump administration. You can’t. Isn’t that crazy? There are over 150 million women in the United States, and not one suffered because of 45. That’s wild. Now, because of Democrats overreach, entire economies, already decimated by leftist Covid mania, have been crushed, vanquished, eliminated, and the jobless husbands are left picking up the pieces. Substance abuse and domestic violence both rose in 2020 (under leftist panic porn). Color me bruised if that doesn’t sound like a raw deal for women. Were you traumatized by the Access Hollywood tape? Or the (absolutely hilarious) Rosie comment at the debate? I hope you and your feelings are all right while knowing that women all over the country are figuring this out. There’s also the uncomfortable fact that the transgdener movement has erased every last iota of feminism, so there’s that, too. Gee, I wonder if Biden will go to bat for them, though?

And don’t even get me started on racism. What is one thing Trump did that was racist? Just one. You and I both know he isn’t a real racist, or that he even cares about race. The best evidence they have – and by the best I mean the only – comes from patently false reportage out of Charlottesville. The tape is out there if you want to listen to him disavow white supremacists three separate instances in real time. The tech tyrants at YouTube even allow – for now – compilation videos of him disavowing white supremacy. What’s more racist, the Trump philosophy of meritocracy or the Biden philosophy of propping up blacks because they allegedly can’t do it on their own?

One of the craziest and depressing realizations is that we are only three months into your diaper filling excuse of a vote. Put differently, that’s just 6%. What the actual.

Can you imagine your outrage if Donald Trump had a son with just 1/1024th the scandalous and morally decrepit behavior as Hunter Biden? Those are Elizabeth Warren numbers, someone you also would have let win by keeping that first circle empty in the booth. The media lost their minds when Ivanka Trump peddled bracelets or some other garbage. In this case, Hunter is actually in bed with Russian, Ukranian, and Chinese officials and there is nary a peep! Trump lost over $1 billion and the Biden’s live in extravagant wreath after a public service career, and that’s just fine apparently. Let me repeat that: Trump lost a boatload of personal wealth and never took the presidential salary. Who else has ever left office poorer, especially in today’s climate?

Every day, we wake up to a soul-numbing story about America being suffocated. In just three months, the Biden administration has itself gone after, or encouraged big businesses to go after, 1st amendment rights, 2nd amendment rights, 4th amendment rights, and 10th amendment rights. That is not good. And remember, the whole time the entire leftist outrage machine demonized Trump for stomping on the Constitution. Can you say…double standard?

Do you realize that while he was debating Trump, Biden said that only dictators rule by executive order? He actually said that. Then, he signed a flurry of culturally seismic orders on his first day in office. No big deal. Do you also realize that he campaigned on Trump’s allegedly disastrous Covid policy, only to enter office and admit that we had to let it run its course and keep using Trump’s Operation Warp Speed vaccine? Oops, did I say campaign? He hid for five months and did nothing. Even if he knew the fix was in, there is a sentiment that enough Trump votes would negate their cheating. That’s where you come in, but you failed us.

I am left shaking my head as I imagine your ballot, replete with Republican boxes marked off save for the one on the top where it denoted Donald Trump (R), incumbent. You knew what voting Republican meant. We are witnessing what happens when the Democrats control the House and Senate (looking at you twice, Georgia Republicans). There is no proposal too absurd nor too extreme, like conjuring up new words in the Constitution for the trans community, adding new states to the Union, aligning with globalist values, and trampling on basic human rights like freedom of thought. You knew this was a bad deal for America by voting Republican the rest of the way, but that immaculate conscience of yours demanded more.

But hey, you know better than me. You’re a better person than me. I hope you’re happy with your non-vote. I know I’m not.

An Open Letter To Conservatives That Didn’t Vote For Trump is original content from Conservative Daily News – Where Americans go for news, current events and commentary they can trust – Conservative News Website for U.S. News, Political Cartoons and more.

Prince Harry blasted by friend of Charles for podcast comments – ‘Where is the compassion? | Royal | News