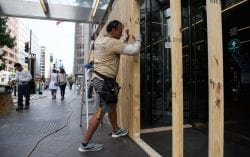 Democratic Washington, D.C. Mayor Muriel Bowser said Monday that the city has requested assistance from the National Guard ahead of a verdict in the trial of Derek Chauvin, the former Minneapolis police officer accused of killing George Floyd.

Bowser announced during a Monday press conference that the chief of police and director of D.C. Homeland Security have been “coordinating and preparing” for the verdict in the Chauvin trial for several weeks. The request for the National Guard is pending, according to Bowser.

“It’s our job to prepare for the worst,” Bowser said.

“We continue to hope that justice prevails in that trial,” Bowser said. “We also want to stay focused in our city on making sure that everyone is safe. So we have a request into the guard. Chief Conti has also put our police force on 12 hour shifts which enhances our response capability. That’s been our posture for about a week.”

Dr. Christopher Rodriguez, director of the Homeland Security and Emergency Management Agency, said the request to the National Guard was put in a little over a week ago.

“We are requesting, on behalf of the [Metropolitan Police Department], some assistance at traffic locations downtown, as well as some enhanced security for our metro stations in the downtown corridor, as well as a quick reaction force that can be deployed anywhere in the city in the event of large scale protests,” Rodriguez said.

“I think it is important to note that they will not be armed,” Rodriguez added, responding to a question from a reporter. “The only authority that can arm the National Guard is the president, and so we did not request any armed assistance for guard support.”

Bowser also addressed unrest in Washington, D.C. over the weekend, saying: “I can’t speak to the motivations of the people who were arrested, but certainly I know that our officers felt like they had to be arrested.”

The verdict in the Chauvin trial is expected this week. The trial’s closing arguments are scheduled Monday, according to the New York Times, after which the case will go to the jury.

The funeral for Daunte Wright, a 20-year-old killed during a traffic stop in late April, is also set for Thursday. Body camera footage showed Wright breaking away from police officers trying to detain him and getting into the driver’s seat of his car. Former officer Kim Potter fatally shot Wright after yelling “taser” several times.

DC Mayor Says City Has Requested Help From National Guard Ahead Of Chauvin Ruling is original content from Conservative Daily News – Where Americans go for news, current events and commentary they can trust – Conservative News Website for U.S. News, Political Cartoons and more.