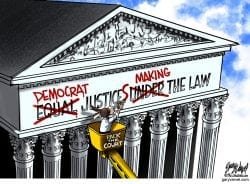 The word that best describes the stupidity and lack of common sense of today’s Democrat party is the self-chosen word “Progressive”, which they think surrounds them with an aura of forward-thinking, compassion, patriotism and cool vibes. They also selected this word with the hope of fooling voters into voting for them, in spite of the Democrat predilection to impose abusive big government, unconstitutional behavior, standing-in-the-school-house-door, higher taxes, open borders and the just plain racism we saw all over the antebellum South of the 19th century when Democrats ran plantations there. And don’t forget their misuse of the word infrastructure to mean a Duncan Donut shop if it serves their needs.

But regression, rather then progress, is what Democrats have produced with their idiotic ideas of recent years. When Democrats are in power, as they are today with the Joey Biden administration, they are prone to punitive, anti-American policies like court packing, higher taxes, censorship by big-tech monopolies, foreign wars, lying news reporting by CNN and others, wokeness, masking, killing jobs by shutting down oil pipelines, multi-trillion dollar borrowing/spending schemes, a summer of rioting and burning in 2020, politicizing diseases and covering up for crimes committed by Democrat politicians and their families. And these things are called “progress” by Democrats.

So from their self-ordained title of “Progressive”, Democrats have degenerated into mean, nasty, lying politicians who have eliminated common pronouns like mother and daughter and have demanded that girls compete in physical competition with men in sporting events.

Is any of this misbehavior on the part of Democrats really considered to be “progress”? I think not.

Democrats Use Words Like “Progressive” And “Racist” With No Understanding Of The Words’ Meanings is original content from Conservative Daily News – Where Americans go for news, current events and commentary they can trust – Conservative News Website for U.S. News, Political Cartoons and more.