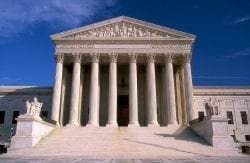 Democrats are planning to introduce legislation Thursday that would expand the size of the Supreme Court, sources familiar with the measure told The Intercept.

The bill aims to add four seats to the Supreme Court, according to the publication. Republicans currently hold six seats on the court while Democrats hold only three. During the contentious confirmation process of Supreme Court Justice Amy Coney Barrett, Democrats threatened that “nothing is off the table” if Republicans confirmed Barrett.

Republicans nevertheless confirmed Barrett in October and Democrats took control of the Senate and presidency.

Biden refused to address whether he would pack the court during the 2020 presidential election, insisting that he would not provide such an answer until at least 180 days into his presidency and after he had received a recommendation from a bipartisan commission on changing the Supreme Court.

“If elected, what I will do is I’ll put together a national commission – a bipartisan commission … and I will ask them to, over 180 days, come back to me with recommendations as to how to reform the court system … it’s not about court-packing,” he said in October.

He said: “There’s a number of alternatives that go well beyond court-packing.”

Biden established the creation of a commission to study the impact of expanding the Supreme Court on April 9.

Democrats Introduce Bill That Would Add Four Justices To The Supreme Court is original content from Conservative Daily News – Where Americans go for news, current events and commentary they can trust – Conservative News Website for U.S. News, Political Cartoons and more.