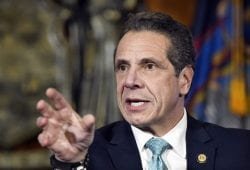 Andrew Cuomo, the sainted and Emmy award winning Governor of New York State, was such a good boy and such a loving son that he became addicted to broadcasting to the entire nation his expressions of how much he loved his aging mother and how he treasured her, that sensible people who accidentally witnessed one of these odd performances could not put into context what the idiot governor was doing, nor why he was doing it.

But at the same time that he was praising his mother with his precious expressions, he was also pushing people who were sick with the covid disease, into nursing homes where these new assignees passed the illness that is often fatal to older people, on to the older residents of the homes, thereby killing up to 8000 people the age of his mother. And all of this human misery was due to the stupidity of the New York governor, who was at the same time playing big-shot with the covid disease and yelling into a microphone at President Trump to get him thousands of ventilators, most of which he never used, but took credit for acquiring nevertheless.

And now the good governor is on the warpath again, fighting the continuing war against grandmothers, stating that, as the designated dictator and medical expert of his state, he’ll give the Trump vaccine to drug addicts before he gives it to the people most at risk with the covid, who happen to be older people, who are again, like his mother.

Since he got an Emmy award from some stupid leftist group for his great television acting performance, ranting and raving, swinging his arms and contorting his face in pretense of taking bold action for the citizens of New York State, which included the killing of the 8000 older people previously mentioned in this piece, what would be the proper current award we should give him for killing old grandmothers while vaccinating hundreds of worthless drug addicts? Perhaps the Nobel?

Andrew Cuomo Is Still Trying To Kill Grandmas In New York is original content from Conservative Daily News – Where Americans go for news, current events and commentary they can trust – Conservative News Website for U.S. News, Political Cartoons and more.