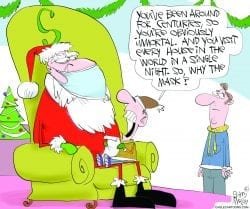 Pastor Tony Spell is a man who takes his texts seriously. He believes in the plain truth of the Bible and the First Amendment. And that’s why Life Tabernacle Church in Baton Rouge, LA will be having Christmas services as usual this year.

In-person. In the presence of God.

Pastor Spell told me this weekend 31 buses from Life Tabernacle will leave the parking lot and bring poor children from an 80–mile radius back to church for a Christmas service and gift-giving event. On a typical Sunday, 647 children participate, but Christmas is expected to be much larger since every other church in the area has canceled the celebration of the birth of Christ on orders from Caesar.

These pastors rationalize their weakness and soothe their conscience by claiming “virtual church” is a breakthrough harnessing technology to reach the Body of Christ. The truth is “virtual church” is as worthless as “virtual learning.” It atomizes the congregation, leaving it distanced, isolated and abandoned.

In a shocking testimony of just how pastors have failed their flocks, a Parade magazine poll found only 9 percent of Christians plan to attend Christmas services.

Many pastors outsourced the defense of their rights and hired lawyers to convince judges to allow them to do what Christ has commanded. California’s John MacArthur, who began the year by complying with the Flu Fuhrers, finally had enough and reopened his church. There are other isolated outbreaks of Christians standing up to Caesar, but most pastors are happy to keep their heads down, embracing meek and mild.

Meek doesn’t come to mind with Pastor Spell. He’s willing to pay the price for his refusal to bow to Caesar.

The chief of police arrested him in front of the entire Life Tabernacle congregation last March when he refused to close the church. Since then, Pastor Spell has been arrested or given a summons a total of 33 times. “I keep the paperwork framed on the wall of my office,” he said.

One Sunday Spell stepped from behind the pulpit to reveal the ankle monitor a judge forced him to wear when he was sentenced to house arrest. That defiance earned him an arrest warrant for contempt of court.

Sentenced to 90 days in jail for the offense, Spell asked to preach one more Sunday before going to prison. The judge agreed and then backed down. He claimed since Pastor Spell was no doubt exposed to the Flu Manchu from all his unauthorized preaching, the judge didn’t want to risk exposing convicts to this one-man disease vector.

During the 10 months Life Tabernacle has been open, Spell says, “There have been no virus deaths in the congregation. We have a religious conviction against doing things that make no sense.”

Worshipers are not forced to run a Death Gauntlet of thermometer–wielding, disinfectant–spraying nannies. Spell trusts his congregation to exercise common sense. If members are vulnerable or sick, they should stay home.

Louisiana authorities have not produced any numbers on Kung Flu cases traced to the church. Instead, Gov. John Bel Edwards went on Jake Tapper’s show and announced he is doing everything in his power to shut Pastor Spell down.

It isn’t working. There have been 350 baptisms this year and Spell explains, “Attendance has grown. While other churches are closed down, their membership has come to our services. People from 50 states have come to attend. A federal judge from Indiana flew down to join us. Life Tabernacle is thriving spiritually, numerically and financially.”

A telling commentary on religious leadership in the area is that while pastors have privately told Spell they support him, not one has publically followed his example and opened their church. Prominent elected ‘conservatives’ are also remarkably shy. Louisiana Sen. John Kennedy has plenty of time to appear on Tucker Carlson to criticize government overreach, but he has never found time for so much as a phone call to Pastor Spell.

Spell is sustained in his fight against unconstitutional and ungodly edicts by his congregation, which regularly votes to continue to stay open and stay preaching.

I’m struck by the difference between Christian pastors in China and in the USA. In China, these courageous men risk imprisonment and torture to preach the Gospel. Their churches are bulldozed. The congregations monitored by state security.

Pastor Spell has some advice for these uncertain trumpets, “It’s time to open. None of us individually are as strong as all of us. There are not enough jails to stop Christians in America from worshiping if we all go to church. If [pastors] had joined with me, by now we would have beaten this.”

An Old Time (circa 2019) Christmas in Baton Rouge is original content from Conservative Daily News – Where Americans go for news, current events and commentary they can trust – Conservative News Website for U.S. News, Political Cartoons and more.