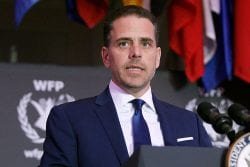 A three-judge panel ruled on Tuesday to uphold the bribery conviction for Chi Ping Patrick Ho, the former chairman of a think tank funded by a Chinese energy conglomerate with murky business ties to Hunter Biden.

Judges on the 2nd Circuit Court of Appeals in New York ruled that the U.S. government’s case against Ho, a former Hong Kong government official, was more than sufficient to warrant his conviction.

“We conclude that the evidence introduced at trial was more than sufficient to prove that Ho acted on behalf of the U.S. NGO (non-governmental organization) to assist it in obtaining business for CEFC Energy,” the judges ruled.

A federal jury convicted Ho on Dec. 5, 2018, on charges related to violations of the Foreign Corrupt Practices Act. He was accused of offering bribes on behalf of CEFC China Energy, a major Chinese energy conglomerate, to officials from Uganda and Chad as part of a scheme to win oil drilling rights in the countries.

Prosecutors said that Ho and CEFC executives offered $2 million in cash stuffed in a box to the president of Chad, Idriss Déby, during a meeting in December 2014.

Ho was chairman of a think tank funded by CEFC called the China Energy Fund Committee.

CEFC paid Hunter Biden nearly $6 million from August 2017 to September 2018 for consulting work as well as for legal services on behalf of Ho.

A report that Senate Republicans released on Sept. 23 said that U.S. banks flagged some of the wire transfers for possible criminal activity. The Republicans said that the business deals between Biden and CEFC raised “criminal financial, extortion and counterintelligence concerns.”

The Senate report said that CEFC wired $1 million to Biden’s law firm in March 2018 for Ho’s legal case. It is unclear what work Biden did for Ho. He is not listed in any of the court filings for Ho’s defense team and did not appear at Ho’s trial.

Prosecutors revealed during Ho’s case that investigators obtained warrants to surveil Ho under the Foreign Intelligence Surveillance Act (FISA). The FISA Court grants the surveillance warrants when there is probable cause to believe that the target is operating secretly on behalf of a foreign government.

Ho was sentenced to 36 months in prison, and freed in June of this year due to good behavior.

Ho challenged the conviction, claiming that there was insufficient evidence to support the government’s allegations and that the federal court improperly allowed evidence to be allowed at Ho’s trial.

Federal prosecutors are reportedly investigating Biden over his business dealings with several foreign entities, including CEFC. Biden revealed on Dec. 9 that he was under investigation by the U.S. attorney’s office in Delaware over his “tax affairs.”