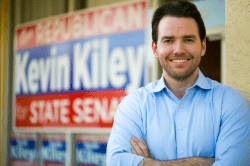 Gavin Newsom’s top advisors are “increasingly concerned” that the recall effort against him “could mushroom into a major threat in 2021,” as Politico has reported.

The Sacramento Bee says that “fending off” the recall is a major challenge for Newsom’s new chief-of-staff (a top lobbyist, to no one’s surprise). And the Associated Press reports “Newsom’s advisers are carefully watching the signature count.” It reminds me of a quote sometimes attributed to Ghandi: “First they ignore you, then they laugh at you, then they attack you, then you win.”

One particularly ominous sign for Newsom is that his own party is musing about throwing him under the bus. Politico quotes a Sacramento insider “aligned with a major special interest group” as saying, “We’ve gotten calls from Democrats who are already kicking the tires.” In a sign of desperation, the Newsom campaign put out a bizarre statement that initiating a recall against him is a “refusal to play by the rules.” I’d suggest he peruse the California Constitution, Art. II, § 13-18, setting forth the rules for recalls.

The bar for a recall is undeniably high. When Gray Davis was recalled in 2003, only 900,000 verified signatures were required, but it will take 1.5 million to qualify the Newsom recall. Current estimates are that about 850,000 signatures have been collected. Countless volunteers are working tirelessly to increase that number every day, with what Lead Proponent Orrin Heatlie calls a “French Laundry list” of reasons for people to sign. The campaign received a major shot in the arm when a Sacramento Superior Court extended the deadline to March 17.

The ability to launch a recall was added to the California Constitution through a special election in 1911. Supported by Gov. Hiram Johnson and growing out of a national political movement associated with Teddy Roosevelt, it was seen as a tool to “unlock the special interest grip” on state politics. That grip has never been tighter than it is now. Newsom may not have created all the problems causing California’s decline, but he fully embodies them – to the point of caricature. And he’s dramatically accelerated them in a way we never could have imagined.

California’s response to COVID-19 has been among the worst in America, with great economic destruction, loss of life, and violations of democratic norms. Courts continue to rule that Newsom’s lockdown strategy lacks justification. Health experts say that school closures are doing incalculable harm to kids. Hundreds of thousands of Californians continue to wait on unemployment benefits while hundreds of millions of dollars fly out the door of his EDD Office to prisoners scamming the government.

Californians sense the American dream is dead here. In a new poll by the non-partisan Public Policy Institute of California, nearly two-thirds of Californians say kids growing up in the state today will be worse off than their parents. And recently released data shows California just had its worst population growth in a century, as we lost 135,600 people to other states over the last year. Mark Baldassare with PPIC called the numbers “really startling,” saying, “This isn’t the Golden State of the past” where people came from all over “to find their way to the California dream.”

Kevin Kiley is a California legislator and author of the forthcoming book “Recall Newsom: The Case Against America’s Most Corrupt Governor”

KILEY: We Are Winning The Fight To Recall Governor Newsom is original content from Conservative Daily News – Where Americans go for news, current events and commentary they can trust – Conservative News Website for U.S. News, Political Cartoons and more.