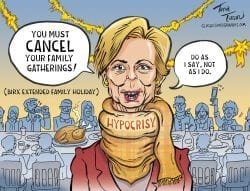 When the covid disease broke in America, President Trump, on advice from his government experts, gave the order for the lockdown of economic transactions in America. After witnessing the tragedy and misery this move caused, he said that he regretted this unnecessary mistake and swore to never lockdown America again. He became slightly philosophical on the subject and said that America should not give up and surrender its economy to the disease, and advised Americans to have faith in the future, and that the disease would run its course and the nation could return to its former, non-fearful, non-masked, life.

Of course the leftist press attacked the president for his words of optimism and said that he should have instilled fear in America for the disease that was sent here by China. And even the great thinker and leader, Joey Biden, backed up the press’s negativity and predicted a future, under his administration, of a “dark winter” that would likely need another devastating, economy-destroying lockdown to get rid of the Wuhan disease, and that America would absolutely need an additional 100 days of masking in order to get right with covid.

Mike Rowe, the lead in the television program “Dirty Jobs” disagrees with Biden’s dark and negative outlook on the future, and intellectually takes President Trump’s side of the mask/lockdown issue and its human suffering that has lasted eleven months.

Mr. Rowe believes that “safety”, as in the phrase “safety first” does not communicate a message America can live with. He tells us that when experts lecture that “our safety is their (the experts’) responsibility” they are either trying to sell us something or are running for office. He quotes CNN’s negative and defeatist attitude as saying that all Americans should fear the covid disease, and to allow the disease to dominate our lives, and if we don’t allow this domination we are downplaying the fatalities that have resulted from the disease.

Mr. Rowe believes that “safety is not a thing to be ranked, but is rather a state of mind” to be applied as needed. “But if we were to rank it, it would rarely be ranked first. Were safety truly ‘first’, no level of risk would ever be encouraged or permitted, and no work would ever get done”.

He further states that “this does not mean that safety isn’t a critical part of living, (b)ut the notion of telling people that safety is always first, no matter the cost, is not only untrue, it’s counter-intuitive”. He relates some of the potentially dangerous and possibly fatal, jobs he role-played on the television series, while being told by his program advisors that “your safety is our top priority”, at which time he would embark on a dangerous job in spite of being assured that his safety was all any of the professionals advising him on the dangerous jobs really cared about; and then he performed the potentially dangerous and deadly job, even with the possibility of injury if something went wrong.

Mr. Rowe also reminds us that we’ve come to terms with 40,000 annual automobile deaths in America each year, so it’s obvious that “when it comes to driving, safety isn’t first, despite all of the safety equipment the government has demanded be added to every vehicle made in America.

Mr. Rowe takes President Trump’s side of the issue of safety by asking the question, “what if the cost of the cure (for covid) is greater than the cost of (living with) the disease”, as in destroying America’s economy by keeping everyone at home and forbidding that citizens work at all, never earning a living for themselves and their families, while living a life of meaningless lack of accomplishment and eventual death by boredom.

The political-left in America has weaponized and politicized the China Wuhan disease and have used it as a club to politically defeat President Trump and keep his approval ratings down. It’s obvious to any serious person that the economic lockdown must end so people can once again earn a living and keep their homes paid for and their families fed and clothed, and we have to look deeper at the insistence on masking by our Democrat leaders. In many cases we’ve seen these same leaders refusing to wear the worthless masks themselves, while insisting that we citizens wear them constantly, either because they think they are better than we lesser citizens, or because they know that masks are worthless, so why should they wear one when they are out of public view.

The latter point (that Democrat mayors and governors know masks do nothing to promote health or that the disease is so non-fatal that there is minimal risk of long-term illness or death) is most persuasive, because recently one of President Trump’s lead medical advisors, Dr. Deborah Birx, was seen on an outing with family members while NOT wearing a mask to protect her family or herself. If Dr. Birx had any fear that the disease would kill a family member she would have insisted that her entourage all wear masks. But she doesn’t fear the disease, and/or she doesn’t believe that the bothersome masks will provide any protection, so she led her group without wearing a mask. And to add insult to injury, Dr. Birx was with her family members to winterize her island cabin off the coast of Delaware, while many thousands of jobless Americans are unable to work or enjoy Thanksgiving or Christmas with family members because of Democrat orders for all citizens to shelter in place.

Our Democrat political leaders are either too dumb or too uncaring to recognize the economic disaster facing American families if this lockdown foolishness doesn’t come to an end soon, or they are so devious and corrupt that they intend to continue the strangle-hold they have on America into a continuing, long-term, power-hold and control over the nation as they find a way to implement their green new deal, which will make the Wuhan lockdown look like child’s play. Today’s Democrat party is taking Barack Obama’s promise to Fundamentally Transform America deadly seriously, and their plans for the future of this great nation will be a horror story to behold if we don’t halt these fool dictators in their final grab to gain complete power over us and introduce the death of our constitution.

With tens of thousands of Americans already dead from the covid disease, and who knows how many more deaths have been mis-coded to make the covid menace appear even more deadly than it really is, America doesn’t have the luxury of being completely “safe” from the disease. We have to take precautions and proceed with safety and good judgment in mind, knowing that all of life requires differing levels of risk, but we must accept this risk as part of a full life, looking to the future of our nation and the welfare of our children and grandchildren, and get America back to work.

It’s our responsibility to join Mike Rowe in making life and prosperity first in our lives, and keep safety in third place.