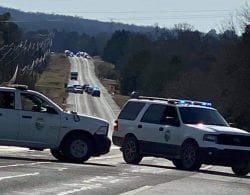 Deputies in Tennessee closed off a stretch of highway on Sunday to investigate a suspicious truck that blared audio similar to that of the RV in Nashville that exploded on Christmas Day.

“Sheriff’s deputies in Rutherford and Wilson Counties are investigating a box truck parked at a convenience store playing audio similar to what was heard before the Christmas Day explosion in Nashville,” Sheriff Mike Fitzhugh told the Washington Examiner. “The driver traveled from Rutherford County into Wilson County where he was stopped by deputies and detained.”

This photo provided by Jimmy Corn shows the “suspicious vehicle,” which appears to be a white box truck. pic.twitter.com/8hugd44enw

A robot was dispatched by deputies to probe the white box truck, which was captured in photographs. No explosive devices were found inside the vehicle, and the exact words of the audio were not immediately revealed by law enforcement, according to the Examiner.

Authorities Rutherford and Wilson referenced the suspicious RV in Nashville, Tennessee, that detonated following warnings to the public to evacuate the area. The suspected bomber, Anthony Quinn Warner, was reportedly killed during the explosion, which damaged dozens of businesses around a prominent city strip, the FBI said, according to ABC News.

Human remains were found in the beginning stages of the blast investigation and those were later confirmed to belong to Warner, ABC reported.

The #FBI and #ATF are seeking info concerning the owner of the RV, Anthony Quinn Warner, linked to the explosion in downtown Nashville on Friday morning. Recognize him? Call 1-800-CALL-FBI or submit tips online at https://t.co/hG6KFmQ7dG. @FBI @ATFHQ @ATFNashville pic.twitter.com/o8fqiHkATl