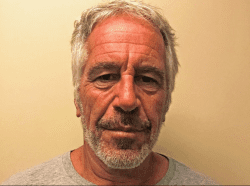 “EMS responded and performed CPR on the individual but the aided was later pronounced deceased,” Riley said.

Though the city Medical Examiner has not determined a cause of death, the former Epstein cellmate reportedly caught the coronavirus while he was in a jail for cooperating witnesses, the New York Daily News reported Monday. He had suffered from both heart problems and diabetes, which are both conditions that are associated with more serious coronavirus cases, the News noted.

Reyes shared a cell with Epstein in August 2019 before he was transferred to Queens Detention Facility, according to the News. The day after Reyes was transferred, Bureau of Prison (BOP) records show, Epstein died of an apparent suicide in a federal jail in New York City in August 2019.

The last man to share a cell with Jeffrey Epstein died in a Bronx apartment after catching coronavirus at a jail for cooperating witnesses.

Efrain “Stone” Reyes, 51, was found dead at his mother’s apartment, the NYPD confirms.https://t.co/kBDZMo9Chy

According to Reyes’s 27-year-old niece Angelique Lopez, her uncle was chosen as Epstein’s cellmate because he was “disabled” and “had a broken leg” and “kept to himself.” Reyes had pleaded guilty to narcotics conspiracy that involved both crack and heroin, the News reported.

She continued: “(Epstein) liked to read a lot and he kept to himself. He wasn’t a problem starter or too loud. My uncle said he was a good cellmate.”

Epstein was treated badly by both prison inmates and correctional officers, Lopez told the publication.

“They knew how much money he had. They said let’s push him around and extort him for money. They thought they could get his money,” Lopez said. “(Staff) were treating him like crap. They were making him sleep on the floor. They wouldn’t let him sleep on a cot.”

The FBI questioned Reyes after Epstein’s apparent suicide, Lopez said, noting that her uncle “cooperated” though he was afraid of reprisal.

“He was a little worried about if he told on the security workers at MCC they would somehow lash out at him. He was worried if they told them what they did to Epstein he was worried it would follow him and affect him negatively,” Lopez said.

The jail in which Reyes caught COVID-19 had been overrun by the virus early on in the pandemic, the News reported, and Reyes reportedly cried when he told his family that he had caught COVID-19. Reyes was released in April but died five months later, according to the publication.

“He thought he wasn’t going to get out of GEO alive,” Lopez said, referring to the private prison where her uncle had been incarcerated. “He thought that was going to be it, he was going to die there.”

“I can’t say COVID didn’t play a part (in his death),” Lopez said. “He came back coughing more than normal. His lungs weren’t the same.”

The FBI and the SDNY declined to comment for this story. The BOP did not immediately return the DCNF’s requests for comment.