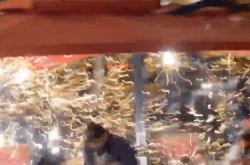 A man who allegedly threw fireworks at diners in Washington, D.C., on Saturday night after the “Million MAGA March” was arrested, law enforcement officials said Sunday.

Javien Michael Dawson, 26, was arrested and charged with assault with a dangerous weapon, the New York Post reported. Counter-protesters to the march in support of President Donald Trump hurled various objects, including fireworks, at Trump supporters outside a P.J. Clarke’s near the White House, video shows.

Dawson “discharged a commercial-grade firework at several victims at the listed location,” around 5:40 p.m., police said, according to the Post.

BREAKING 3 Trump supporters are eating outside at a restaurant, 2 blocks from the White House. 16th & K St. A large group confronts them. Someone throws what appears to be fireworks. Moments later, police push back a crowd that wants to confront Trump supporters: @nbcwashington pic.twitter.com/B8NDOTE0MJ

Dawson reportedly fled the scene before he was apprehended by officers, the Post reported. At least 21 others were arrested Saturday night.

Six people were reportedly charged with weapons-related offenses, including four individuals who carried a firearm without a license or permit, according to the Post. Two individuals were charged with assault on a police officer.

Multiple others were reportedly charged with theft, assault, or disorderly conduct, according to the Post.

The District of Columbia Superior Court did not respond to the Daily Caller News Foundation’s request for comment.

Man Who Allegedly Attacked Trump Supporters With A Firework Arrested And Charged is original content from Conservative Daily News – Where Americans go for news, current events and commentary they can trust – Conservative News Website for U.S. News, Political Cartoons and more.