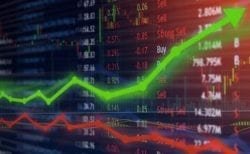 Markets in Europe and Asia immediately jumped after Moderna made its trial results public Monday morning and remained high, according to The Associated Press. The U.S. stock market also surged with the Dow Jones Industrial Average adding 350 points, a 1.2% increase, when markets opened, CNBC reported.

Moderna announced early Monday that its vaccine was 94.5% effective in combatting the novel coronavirus during large-scale human trials. The company also reported that its vaccine can survive in refrigerated temperatures for up to 30 days, according to a separate announcement Monday.

“This positive interim analysis from our Phase 3 study has given us the first clinical validation that our vaccine can prevent COVID-19 disease, including severe disease,” said Moderna CEO Stéphane Bancel in a press release.

Moderna Chief Technical Operations and Quality Officer Juan Andres said the vaccine will be able to be stored in “readily available pharmaceutical freezers and refrigerators.”

The vaccine’s ability to survive longer “would enable simpler distribution and more flexibility to facilitate wider-scale vaccination in the United States and other parts of the world,” Andres said.

The positive news Monday comes one week after Pfizer announced that its coronavirus vaccine candidate was more than 90% effective during its large-scale trial. Markets rallied in response to Pfizer’s Nov. 9 announcement, according to The New York Times.

Meanwhile, President Donald Trump celebrated the progress of Operation Warp Speed, the federal government’s multiagency effort to produce a coronavirus vaccine quickly, during a news conference Friday. The goal of the operation has been to produce 300 million doses of “safe and effective vaccines” by January 2021.

Moderna thanked its partners at Operation Warp Speed in its press release Monday saying the effort has been “instrumental” in the success of the vaccine. The company received $2.48 billion in research and supply funding related to its coronavirus vaccine development from the Trump Administration, according to Fierce Pharma.

Average coronavirus cases and deaths per million have been increasing rapidly since mid-October, according to The COVID Tracking Project. On Sunday, the U.S. reported 672 new coronavirus-related deaths and 145,670 new cases while 69,987 Americans remained hospitalized from the virus.