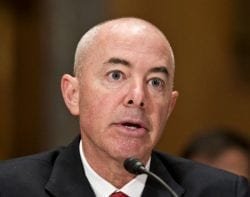 Mayorkas is now a top contender to lead DHS in a Joe Biden administration, according to Bloomberg and The Washington Post,

Mayorkas served as head of U.S. Customs and Immigration Services (USCIS) during the Obama administration and then deputy director of DHS. Mayorkas is also the architect of the so-called DACA program, which grants green cards to illegal aliens who were brought to the U.S. as children.

Mayorkas’ tenure in the Obama administration was marred by investigations into his intervention on behalf of several high-profile Democrats who sought approvals for their companies under the EB-5 program, which grants legal resident status to foreign nationals who invest at least $500,000 in U.S. companies.

More than 80% of EB-5 investors are Chinese nationals. Some Republican lawmakers have questioned whether the Chinese Communist Party has used the EB-5 program as a gateway for U.S. residency for its members.

The DHS inspector general released a report on March 24, 2015, that said that Mayorkas improperly intervened to help the brother of Hillary Clinton and two former Democratic National Committee chairmen with issues related to the EB-5 program.

Mayorkas also spoke in 2013 with then-Senate Majority Leader Harry Reid regarding an EB-5 application for a casino represented by the Democrat’s son, Rory Reid.

“Mayorkas communicated with stakeholders on substantive issues, outside of the normal adjudicatory process, and intervened with the career USCIS staff in ways that benefited the stakeholders,” the IG report said.

According to the report, Mayorkas “exerted improper influence” to fast-track visas to help GreenTech Automotive, a clean energy car company controlled by Tony Rodham, the brother of Hillary Clinton, and Terry McAuliffe, the former chairman of the DNC.

The IG report described emails from McAuliffe to Mayorkas in 2010 complaining about the lack of approval of EB-5 status for Gulf Coast Funds Management, an investment firm controlled by Rodham and McAuliffe that owned GreenTech automotive.

The IG found that staffers at USCIS opposed allowing Gulf Coast and GreenTech to use EB-5 to attract investors. But the report said that Mayorkas insisted that the application be given more attention.

Mayorkas met with McAuliffe multiple times in 2011, according to the report.

The New York Times has reported that in 2011, Mayorkas overruled two lower-level DHS officials to grant a visa for a Chinese executive who wanted to invest in GreenTech through the EB-5 program.

McAuliffe, who served as governor of Virginia from 2014 to 2018, also arranged a meeting for Mayorkas and staff for Joe Biden, The Times reported.

The IG report said that career USCIS officials were surprised when Mayorkas said he was taking over the GreenTech matter in 2013. They also said that he took files related to the company’s application home with him.

Thirty-two Chinese nationals who invested in GreenTech through the EB-5 program sued McAuliffe and Rodham in November 2017, claiming that they were misled about GreenTech’s business prospects and their visa applications.

The Chinese nationals, who invested $560,000 apiece in GreenTech in 2012 and 2013, said that McAuliffe and Rodham pledged to “leverage” their “political connections” to ensure that the investors’ visa applications “will get to the top of the pile, and then be approved.”

The IG report did not accuse Mayorkas of intervening to help individual investors’ obtain visas. He denied exerting political influence in July 2013, during confirmation hearings to take over as DHS’s second-in-command. He said that allegations that he helped McAuliffe for political purposes were “unequivocally false.”

Mayorkas also intervened to help a casino company represented by the son of Harry Reid which sought expedited processing for EB-5 visa applications.

According to the IG report, a staffer for Reid reached out to USCIS in December 2012 to speed up the EB-5 application process for SLS Hotel and Casino, which was represented by Rory Reid, the son of the senator.

The IG report said that Reid leaned on Mayorkas to help SLS Hotel and Casino “cut in front of the line” in the EB-5 process on behalf of a group of Chinese investors. After the application was denied, Reid called Mayorkas on Jan. 8, 2013 to ask him to inquire into the denial, the IG report said.

“We found in that case that there was several highly unusual things that occurred as a result of the intervention,” John Roth, the DHS inspector general, testified to Congress two days after releasing his report on Mayorkas.

Mayorkas resigned from DHS on Oct. 28, 2016. He is currently a partner at WilmerHale, a top Washington, D.C. law firm.

The IG also found that Mayorkas ordered USCIS to reverse an EB-5 ruling related to film production companies linked to former Pennsylvania Gov. Ed Rendell, a close ally of Joe Biden’s who was also a chairman of the DNC.

Roth testified that USCIS officials were poised to reject EB-5 applications for L.A. Films and Sony Pictures in July 2011.

Roth said that within an hour of the phone call, Mayorkas directed his staff to reverse the EB-5 denials for the film companies.

“Almost immediately after that — within an hour of that phone call — Mr. Mayorkas directed his staff to reverse the denials that had been issued and stop issuing denials,” Roth testified.