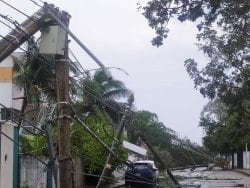 Over 2 million people lost power and at least half a dozen have died following Hurricane Zeta’s Wednesday landfall in Louisiana.

Zeta, a Category 2 storm, pummeled the Louisiana coast with 110 mph winds, before moving into Georgia, Alabama and Mississippi, according to NPR. Four people were killed by falling trees in Georgia and Alabama, some of whom died in bed, the Associated Press reported.

One man was electrocuted to death in New Orleans, according to AP. Another individual drowned in Mississippi during the surge.

Around 2.6 million homes and businesses lost power during the violent storm, the news wire reported.

“The wait is kind of ridiculous, but it is what it is, you know?” a local resident told AP.

“I have no lights. I have no idea how long I’ll be without power. I’m hopeful that my generator gets fixed. That’s why I’m coming to put gas in the tanks. If it doesn’t, then I guess I just have a lot of gas to ride the four-wheeler.”

Democratic Louisiana Gov. John Bel Edwards, who has called in the National Guard for hurricane assistance, urged caution in the post-storm efforts, indicating that many could still lose their lives to mishaps.

“Oddly enough, it isn’t the storms that typically produce the most injuries and the fatalities,” he told AP. “It’s the cleanup efforts. It’s the use of generators. It’s the carbon monoxide poisoning. It’s the electrocution that comes from power lines. So, now is the time to be very, very cautious out there.”

Zeta is the fifth major storm to slam Louisiana in 2020 and the third to impact the state since August, according to the Washington Post.

In a first, baby has DNA from 3 parents