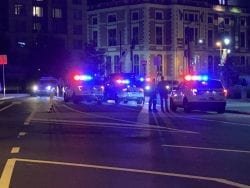 Numerous explosives devices were found packed inside a van near a Philadelphia Wednesday as unrest continues in the city following the police shooting of Walter Wallace Jr., officials said.

Authorities stumbled upon the vehicle around 10 p.m. on Wednesday, according to Fox 29. The Philadelphia bomb squad and agents of the Bureau of Alcohol, Tobacco, Firearms and Explosives (ATF) responded to the scene, the local outlet reported.

Multiple M-type explosive devices, which are classified as illegal on the ATF’s webpage, were located within the van, according to Fox 29. Law enforcement said the illicit munitions were similar to those used by rioters to bust into ATM machines, the local outlet reported.

Unrest has surged in Philadelphia after Wallace was shot and killed by police following a call that a man was armed with a knife, according to NBC Philadelphia. Officers repeatedly instructed the man to drop his blade before shots rang out, the outlet reported.

Van Packed With Explosives Found In Philadelphia Amid Riots And Unrest is original content from Conservative Daily News – Where Americans go for news, current events and commentary they can trust – Conservative News Website for U.S. News, Political Cartoons and more.

How To Make Sure The 2020 Election Never Happens Again