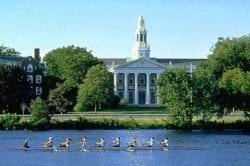 Bacow said there were “lots of complexities in declaring holidays” like their effects on “obligations on various union contracts” and federal research funding, the Harvard Crimson reported. Bacow said the university had “taken a number of steps” to ensure students and staff can vote.

“We’ve encouraged our faculty to be understanding of students who need to take time off to vote,” Bacow said, the Crimson reported.

Harvard Vice President of Human Resources Marilyn Hausmann told supervisors last week “to ensure that your managers provide scheduling flexibility to your staff members” to vote, according to an email shared with the Daily Caller News Foundation.

The Change.org petition, which gained more than 1,200 signatures, urged for the holiday as way to allow students to vote, volunteer at the polls or help others vote. Started in early October, the petition cited other colleges with the holiday and noted that Harvard has 12 holidays.

Despite over 1,250 signatures on a petition calling on University President Lawrence S. Bacow to designate Election Day — Nov. 3 — as a University holiday, he declined to do so in an interview with The Crimson Wednesday. https://t.co/zARbdXtxfQ

Harvard sophomore Jack Swanson said his inspiration for starting the petition came from an email Bacow had sent about voting and the importance of taking action, according to another Harvard Crimson report.

Petition organizers said they were dissatisfied with the lengths people go take to vote, saying that students and staff are obligated to ask a manager or instructor for flexibility, possibly preventing their voting abilities, the Harvard Crimson reported.

Bacow’s responded that “people have been voting at Harvard for a very, very long time,” the Harvard Crimson reported.

“Having talked to my predecessors, I don’t think we’ve had difficulties with people feeling like they cannot vote because either they’re employed or they’re in school at Harvard,” Bacow said. “I would not expect that to be the case now.”

Employees usually don’t require time off since polls run “beyond most normal work schedules,” but “may be entitled” to it, according to school policy.