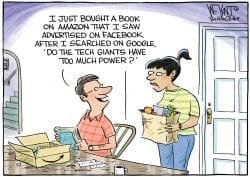 The Babylon Bee could avoid the punitive scrutiny of our Big Tech overlords if the site would just follow the lead of Senate Republicans.

The Babylon Bee is a conservative Christian satire site that has – in the eyes of Silicon Valley censors – committed the unforgivable sin: It’s too effective and too funny.

The Bee is different because it’s unpredictable and most important it satirizes all sides. It pokes gentle, non–profane fun at Christians and atheists, along with conservatives and leftists. This is not to say the satire is split 50–50. The Bee leans conservative and many of the satiric items require insider knowledge of how Christians worship and wrangle.

Then Trump is targeted: “Trump Tries To Win Suburban Women By Starring In Series Of Romance Novels.” That article features Donald Trump wearing a frilly, pirate shirt open to his navel on a book titled, “Orange Passion: Four More Years of Ecstasy.”

And the son merits, “Heartwarming: Amy Coney Barrett Just Adopted A Local Troubled Youngster Named Hunter.” Under that headline is the familiar Barrett family photo with a Photoshopped Hunter Biden inserted into the last row.

My favorite was the “KJV” headline, but I know it stands for King James Version of the Bible. The casual reader probably wouldn’t recognize the abbreviation or know that Christians have been arguing about what version of the Bible to use in Sunday services for over 100 years.

Had the Bee stayed with Christian insider jokes it would have been safe at least until Kamala Harris’ second term. Publishing topical items is what attracted the Eye of Sauron. The Bee’s Facebook page was demonetized this week after it published, “Senator Hirono Demands ACB Be Weighed Against A Duck To See If She Is A Witch.”

Demonetized means any ad revenue generated by visitors to the site will no longer be shared with the Bee. Facebook will keep all the money. It’s censorship abetting theft. Facebook isn’t worried about repercussions. It’s a monopoly and monopolies do as they please.

The Babylon Bee can’t exist without revenue, which is exactly the point.

Facebook’s justification for digital robbery was the story “incites violence.” Babylon Bee CEO Seth Dillon summed the situation up nicely, “So after a manual review, Facebook says they stand by their decision to pull down this article and demonetize our page. I’m not kidding. They say this article ‘incites violence.’ It’s literally a regurgitated joke from a Monty Python movie! In what universe does a fictional quote as part of an obvious joke constitute a genuine incitement to violence?”

The Babylon Bee is being punished for being too effective and having too much reach with its impure thoughts.

This could have been avoided if the Bee would only follow the lead of the country club conservatives in the Senate. The last few days have seen a coordinated effort by Big Tech to censor a series of stories from the New York Post based on the contents of Hunter Biden’s laptop.

Less than three weeks before the vote Silicon Valley is suppressing an international scandal that could prove deadly to Biden’s chances for winning the election. It’s unprecedented election interference by Big Tech monopolies.

Senate Republicans on the Judiciary Committee were initially talking tough. Subpoenas were going to compel Twitter and Facebook CEOs Jack Dorsey and Mark Zuckerberg to explain their enormous in-kind contribution to the Biden campaign. Sen. Lindsey Graham (R–Spineless) promised a vote this week.

Now Politico says even that tiny bit of umbrage has been stamped out. “Judiciary staff has indicated internally that plans for the vote were delayed in part due to some GOP panel members wavering on whether to support the action. Republican officials have also expressed trepidation about how quickly the committee has moved to vote on the subpoenas.”

Well, yes. No need to be hasty. It’s not like there’s an election at stake! These collaborating conservatives will slither back into their offices and hope the storm passes. They don’t particularly like Trump and certainly don’t want their Twitter or Facebook accounts to be frozen.

Instead of continuing to feature the Hirono satire on its home page, the Bee could have buried it with the rough draft of the Senate subpoenas. The Senate’s housebroken conservatives have grown accustomed to bowing before Big Tech.

Had the Babylon Bee stuck to critiquing the cuisine at Baptist potlucks, all this could have been avoided. Just follow the advice of Matthew 10:16 in the Senate Revised Version: “Therefore, be as craven as serpents and harmless as doves.”