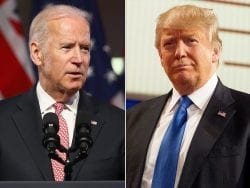 The purpose of a Presidential debate is to help people decide who to vote for and give them an awareness of what the candidates stand for. Now with mail-in voting and early voting 48 million people have voted already. My how things have changed over the years. On Thursday at 9 PM, Donald Trump and Joe Biden went “head-to-head” for 90 minutes at Belmont University in Nashville, Tennessee.

The final debate’s moderator was NBC News White House correspondent Kristen Welker. On Sunday, President Trump posted a tweet about Welker, saying that “she’s always been terrible and unfair,” but that he’d “still play the game.”

First of all it was decided that both candidate’s mics would be muted to silence them to keep from interrupting each other like in the last debate. This is a bad idea because they could silence one candidate’s comments over another in this case Trump’s comments and not just when interrupting. They should have a rule that says one candidate can’t interrupt another and must wait until each one is through talking.

Secondly, the moderator was Kristen Welker is a true anti-Trump hater and works for MSNBC who like CNN has become a propaganda sheet for the left. She comes from a long list of democrat operatives and donors and she and her family spent Christmas with the Obamas once so there is no objectivity there. What I have been suggested is that there should be two moderators one conservative and one liberal. The conservative could ask the liberal questions and the liberal could ask conservative questions.

Thirdly this was supposed to be a foreign policy debate.  Ms. Welker was told she could pick and choose what questions she wants to ask and decided against foreign policy because that could be “a distraction from Biden.”

White House Press Secretary Kayleigh McEnany spoke out on Tuesday to shred the upcoming debate moderator Kristen Welker of NBC News, accusing her of giving  Democratic presidential nominee Joe Biden “some cover” by ditching foreign policy as a topic for the final showdown between the candidates.“They set it up, didn’t they? They set it up exactly for Joe Biden,” McEnany told Fox News, referring to the Commission on Presidential Debates (CPD).  “They are staging this for Biden,” she continued. “If you look through the topics, they’ve basically hand-selected [them] to set up Joe Biden for a win. It’s appalling what we’re seeing.”

Kristen really surprised me and I thought she was the best moderator of the past ones far better than Wallace. In fact, Trump congratulated her for a job well done during the debate. She kept the candidates to their time limit and even when they ran over she let them speak. When she interrupted Trump he would politely say I just want to make this one point and she would let him.

Trump came off like a true businessman with having his facts together and even-tempered while Joe appeared to struggle and was very defensive, arrogant, and emotional and sometimes displaying real anger as he raised his voice.

Biden said he never called black criminals super predators when he did in 1998.

Joe said he never took a cent from any foreign country when everything shows that Hunter took millions from China, Russia, Ukraine and Kazakhstan and gave Joe 10%. Joe said Hunter did nothing wrong. Then how come Hunter’s partner is in jail Joe and his other partner has been indicted and awaiting jail?

FILE – In this Oct. 11, 2012, file photo, Hunter Biden waits for the start of his father’s, Vice President Joe Biden’s, debate at Centre College in Danville, Ky. In 2014, then-Vice President Joe Biden was at the forefront of American diplomatic efforts to support Ukraine’s fragile democratic government as it sought to fend off Russian aggression and root out corruption. So it raised eyebrows when Biden’s son Hunter was hired by a Ukrainian gas company. President Donald Trump prodded Ukraine’s president to help him investigate any corruption related to Joe Biden, now one of the top Democrats seeking to defeat Trump in 2020. (AP Photo/Pablo Martinez Monsivais, File)

Joe accused Trump of not caring about the virus and people dying or doing anything to help find a cure and everything he suggested he would do Trump already has done. Trump said how they have good companies working on a vaccine and will have 100 million doses by the end of the year.

Biden said we can save a million lives if we all wear a mask and if restaurants practice social distancing.  Excuse me Joe but restaurants already do that. I think staying in your basement has really wracked your brain, Joe. You really need to get out in the fresh air more and remember to wear your mask.

Biden accused Trump of not acting on the virus and should have consulted with Pelosi when it happened. Trump responded saying he put the travel ban on China and Europe when Pelosi was dancing and inviting people to Chinatown. He said Biden accused him of being xenophobic and three months later said he should have done that sooner.

By the way Joe Trump did everything himself from getting ventilators to people who needed them, getting the two hospital ships here in record time and setting up the  Javits Center with 3000 beds and getting emergency research to find a vaccine while democrat just sat on their hands thinking of ways to impeach him. So don’t you and every other Trump critic go around accusing  him of not doing anything.,

Trump said when he spoke with Obama when he first got in Obama told him North Korea would be a problem. After he got in Trump said he met with Kim and today there is no war like everyone said would happen if he got in.

When Biden described all the things he would do if he wins the election with the virus, economy, jobs, foreign policy ,etc, Trump the ever counter puncher that he is asked Joe why didn’t he do those things when he was vice president?

Biden said he would replace Obamacare with Bidencare if it was overturned. Trump warned that Bidencare would be just Obamacare and socialized medicine where 180 million people would lose their doctors and plans and just have one plan.

Trump came across as the sure winner of the debate while Biden came across as the failed politician.  While Trump was all facts and showed his humor in sarcastic remarks Biden was all platitudes and lies. Trump was presidential and let Biden hang himself. Trump proved to be the ultimate outsider who gets things done while Biden was the ultimate insider with 47 years of failure.

Fox News took a poll after the debate and it was 74% for Trump and 24% for Biden.

Trump will now hit the trail again with several rallies a day now until Election Day. Will Biden retreat to his basement bunker again or will he come out like the groundhog looking for his shadow?