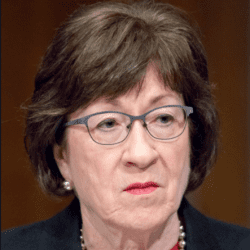 Republican Senators Susan Collins and Lisa Murkowski voted against going into an executive session to consider the confirmation of Amy Coney Barrett Friday.

The United States Senate voted 51 to 46 to go into executive session to consider the confirmation of Trump’s Supreme Court nominee. Democratic senators Kamala Harris of California, Doug Jones of Alabama, and Kyrsten Sinema of Arizona did not vote.

“I’ve shared for a while that I didn’t think we should be taking this up until after the election, and I haven’t changed,” Murkowski said Thursday, Newsweek reported.

“That means I haven’t changed my mind on that,” the Alaska senator added, asked whether her response meant that she would vote “no.”

“In order for the American people to have faith in their elected officials, we must act fairly and consistently–no matter which political party is in power,” Collins wrote in a September statement. “President Trump has the constitutional authority to make a nomination to fill the Supreme court vacancy, and I would have no objection to the Senate Judiciary Committee’s beginning the process for reviewing his nominee’s credentials.”

“Given the proximity of the presidential election, however, I do not believe that the Senate should vote on the nominee prior to the election,” Collins continued. “In fairness to the American people, who will either be re-electing the president or selecting a new one, the decision on a lifetime appointment to the Supreme Court should be made by the president who is elected on November 3rd.”

The Senate will vote Oct. 26 to confirm Barrett.

Collins, Murkowski Vote Against Going To Session To Consider Barrett Confirmation is original content from Conservative Daily News – Where Americans go for news, current events and commentary they can trust – Conservative News Website for U.S. News, Political Cartoons and more.