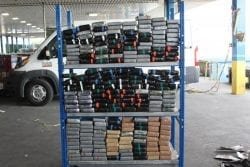 “Our frontline CBP officers utilize their training and experience along with our high-tech tools and that effective combination led to the seizure of $6.9 million in cocaine in the cargo environment,” said Acting Port Director Andrew Douglas, Laredo Port of Entry. “The ability to facilitate lawful trade and travel while maintaining a robust enforcement focus is a critical element to our border security mission.”

The first seizure took place on Friday, Oct. 16 at the World Trade Bridge when a CBP officer referred a tractor trailer hauling a shipment of aluminum scrap for a secondary inspection. Utilizing a canine and non-intrusive imaging system, CBP officers discovered 135 packages containing a total of 337 pounds of alleged cocaine within the shipment.

A second seizure also occurred at World Trade Bridge on the same day when a CBP officers encountered a tractor trailer hauling a shipment of aluminum scrap. CBP officers utilized a non-intrusive imaging system, conducted a canine inspection and discovered 223 packages containing a total of 567 pounds of alleged cocaine within the shipment.

The narcotics combined have an estimated street value of $6,973,400.

CBP Officers Intercept More Than $6.9 Million in Cocaine Over the Weekend at the Laredo Port of Entry is original content from Conservative Daily News – Where Americans go for news, current events and commentary they can trust – Conservative News Website for U.S. News, Political Cartoons and more.