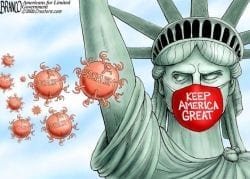 There are things that are worse than death, and Democrats and their politicization of the Wuhan disease appear to be planning the forced imposition of a life of masked imprisonment in our own homes, and that would be worse than death.

The stupidity of people like New York’s Governor Cuomo and New York city’s Mayor de Blazio and their ignorance of the success of Sweden in fighting the covid outbreak by not shutting down that nation, which wise policy resulted in shortening the life of the disease and immunizing the population more quickly, is astounding. America and other less successful nations, did shutdown and lockdown, which has proven to be an extender of outbreaks of the disease, not an eliminator of it.

Sweden allowed the disease to create its own immunity by allowing it to spread while the population built a natural resistance to it, but the New York governor, whose disastrous, personal nursing home policies caused the deaths of eight thousand elderly people, is now promising another state lockdown, thereby causing a predictable increase of new positive tests for the virus, and probably more deaths in New York, which is already leading the nation in dead people caused by the Chinese Wuhan virus.

So now it will take New York, and therefore America as well, even longer to achieve positive tests found in citizens who are a-symptomatic, feel fine and can live with the disease and never know they had it. The leftist hope for a 100 percent negative test for all people tested for the disease is unlikely to happen, which means that if Democrats win the next presidential election in November, the testing, the masks, the fear-mongering and the lockdowns will go on as long as Democrats make public health decisions.

The filthy Democrats must be kept from any position of power until they stop being insane and hateful, which is not likely soon.

Give Me Liberty, Or Give Me The Wuhan is original content from Conservative Daily News – Where Americans go for news, current events and commentary they can trust – Conservative News Website for U.S. News, Political Cartoons and more.