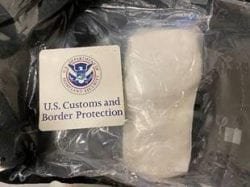 The shipment was headed to an address in Pennsylvania. CBP’s Narcotic Detector Dog “Max’ alerted to the shipment. CBP officers inspected the parcel and found more than six pounds of fentanyl, which is approximately 1.5 million lethal doses of the dangerous narcotic. The street value of this parcel was worth $90,000 and was turned over to the Indianapolis Metro Police Department for investigation.

“CBP is very concerned about the increase we are seeing in shipments of fentanyl, and this seizure showcases the excellent work our officers do every day,” said James Moore, Port Director-Indianapolis. This is a deadly opioid, and our officers were able to prevent this deadly drug from reaching its destination.”

Fentanyl is an extremely toxic substance to handle in addition to being a dangerous narcotic to use. Officers are extremely careful when confronted with this substance, which again demonstrates the risk CBP officers face performing their daily duties.

Fentanyl and its analogues are synthetic opioids that bind to and activate the opioid receptors in the brain creating analgesic and euphoric effects. Compared to other opioid medications, most types of fentanyl are extremely powerful.