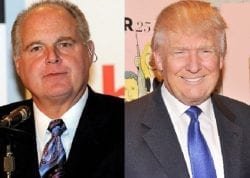 On Friday, talk show host Rush Limbaugh had an unprecedented two-hour commercial-free interview with President Trump. Rush is one of the top radio hosts in the country with over 50 million listeners daily. In his interview, Trump sounded robust and energetic like he always does and went over a myriad of subjects from his stay at Walter Reed and his condition to the campaign and his many accomplishments.

Trump said when he first entered Walter Reed the doctors who are the top doctors from all over the country and the heads of medical companies such as Johns Hopkins said he had it pretty serious and that he came in there in the nick of time. Trump said they treated him with the drug remdesivir and it did wonders for him and he feels better than he has in a long time and even plans to have a rally this weekend. He said he has ordered thousands of doses to be delivered by the military around the country to doctors everywhere to help people with this virus. Trump had nothing but praise for all the doctors and nurses there and said he got the FDA to approve things that normally would take years to approve.

Trump noted how he got things moving early in this virus by setting up the Javits center with 3000 beds, getting the two ships here in record time, and setting up emergency hospitals around the country all of which were never used instead democrats put patients in nursing homes where thousands died.

Trump went on to name his many accomplishments which the media refuses to acknowledge and noted how they had it in for him even before he was elected. He talked about how he has given the American people the biggest tax cut in history and plans to give more and mentioned how the democrats are going to repeal his tax cuts and raise everybody’s taxes. Trump mentioned how democrats want to take everyone’s healthcare plans away from them and have a single-payer plan where the government has complete control of your health care.

Trump mentioned how he has built up the military that Obama decimated and we now have the strongest most powerful military in the world with weapons so great we hope never have to use them.

He mentioned how before this virus unemployment was down to 3.5% the lowest it ever has been with more people working in all demographics than ever before.  “When the virus hit that changed everything but we are now back on the road to recovery with people working again,” Trump said.

Rush intoned then that “You are truly making America great again and because you are succeeding they hate you for it. That is truly a shame. They hate you and they hate America.

Rush said they had several questions from listeners who they asked to send in but Trump covered them all.

Rush and Trump both discussed the Dems plans to pack the courts and make Puerto Rico and DC states to give them more seats in the senate and rubber stamp every piece of legislation they want since Dems love to legislate from the bench. Trump closed by saying this is the most important election in history.

After this interview, Trump had several other interviews with other talk show hosts around the country. What better way to campaign when you are resting from a bout with this virus than reaching out to millions of people via talk radio like Rush Limbaugh’s show.

After the interview Rush espoused on the fact of Nancy Pelosi talking about using the 25th amendment the night before.  On Thursday night Nancy Pelosi held a press conference and said that the next day they would talk about using the 25th amendment which is an amendment about removing a president if he no longer is capable of serving. Everyone naturally thought it was about removing Trump since that is all the democrats have been doing for the last four years is trying to get rid of Trump.

The next day Pelosi had a press conference and said this is not about removing Trump, but about future presidents. Rush immediately jumped in and said this is obviously exposing their plans to get rid of Biden if he should get in and replace him with the radical communist Kamala Harris because no way would a person as radical as she be elected. She may be in the position and sworn in but she would not have the power as others just as radical as she would be controlling her from behind like the man behind the curtain in the Wizard of Oz.

Wake up America if you want o save your country. Something is uneasy in the air.  President Trump said this is the most important election in history. This is the difference between freedom and socialism/communism.