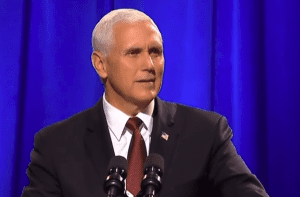 Seventy-two percent (around 175,519 people) voted that Pence was the victor in the first and only vice presidential debate, while 28% (around 69,000 people) said the same about Harris, according to the online poll data.

The debate, moderated by USA Today’s Susan Page, focused on the coronavirus, healthcare, foreign policy and the Supreme Court, with the Nov. 3 election less than a month away, NBC News reported. Much of the debate time — roughly 14 minutes — was devoted to discussing President Donald Trump, NBC reported.

Race, tax reform, crime, China and abortion were minor topics of discussion on the stage, according to NBC.

Pence criticized Harris for her refusal to address the issue of court packing ahead of Amy Coney Barrett’s possible nomination to the Supreme Court.

Kamala Harris’ refusal to answer VP Pence, coupled with Joe Biden’s unwillingness to comment on Packing the Supreme Court, shows Democrats have become a party of radicals, by radicals, and for radicals. || #IngrahamAngle #2020election #VPDebate pic.twitter.com/cFHkJlMj41

Only National Conservatism Can Unite The West And Contain China

Joke of the G7, Pathetic Pandering to Putin, and Bye-Bye Bibi: The Week in Review