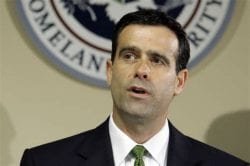 John Ratcliffe, the director of national intelligence, said Wednesday he has sent nearly 1,000 pages of documents to the Justice Department to help with an investigation led by U.S. Attorney John Durham into the origins of the Trump-Russia probe.

“At my direction, the Office of the Director of National Intelligence has now provided almost 1,000 pages of materials to the Department of Justice in response to Mr. Durham’s document requests,” Ratcliffe said in a statement.

Ratcliffe said he will continue “supporting the DOJ in further declassifications consistent with their investigation.”

Axios first reported that Ratcliffe sent the information to the Justice Department.

It was not immediately clear what documents Durham requested and whether they will be made public anytime soon.

Durham, the U.S. attorney for Connecticut, is conducting a sprawling probe into FBI and CIA actions related to the Trump campaign. The investigation has focused on the findings of a Justice Department inspector general’s report which said that the FBI failed to notify a foreign intelligence surveillance court about problems with the Steele dossier.

Durham has secured one prosecution so far in the investigation, which began in April 2019. Kevin Clinesmith, a former FBI lawyer who worked on the Trump-Russia investigation, pleaded guilty in the probe on Aug. 19 to altering an email regarding Carter Page.

It is unclear whether Durham plans to issue a report or whether any more indictments are in the works.

Ratcliffe and his predecessor, Richard Grenell, have declassified several other documents regarding intelligence-gathering activities carried out against Trump and his associates.

On Tuesday, Ratcliffe declassified portions of CIA documents that revealed that the U.S. intelligence community picked up information gleaned from Russian intelligence regarding a possible plan by Hillary Clinton to link Trump to Russia’s email hacks.

Trump tweeted Tuesday night that he had authorized the “total” declassification of documents related to what he called the “Russia hoax.”