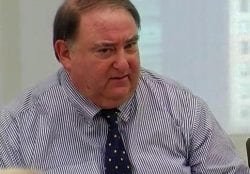 The Senate Homeland Security Committee subpoenaed former Cambridge professor Stefan Halper this week to appear before the panel on Oct. 20 to testify about his role in the FBI’s investigation of the Trump campaign.

Sen. Ron Johnson, the chairman of the committee, authorized the subpoena for Halper on Monday. Halper is required to turn over documents related to the FBI investigation by Oct. 14 and appear for a deposition on Oct. 20.

The subpoena seeks Halper’s documents related to Crossfire Hurricane, a Justice Department inspector general’s (IG) investigation of that probe, and the so-called “unmasking” of Trump associates in 2016 and early 2017.

The Washington Examiner reported the subpoena on Tuesday.

Halper is referred to as “Source 2” in an IG report on Crossfire Hurricane. The report did not identify Halper by name, but the Daily Caller News Foundation had previously reported details of his meetings with Trump aides Carter Page and George Papadopoulos that matched Halper.

According to the IG report, Halper began working as a CHS in 2008, but was temporarily suspended as a source in 2011 due to concerns about “aggressiveness” and because he showed “quesitonable allegiance” to one of his intelligence targets.

He first met Carter Page at an event held at the University of Cambridge on July 10, 2016, three weeks before the FBI official opened Crossfire Hurricane.

According to the IG report, Halper and his FBI handler, Steven Somma, said that the meeting was a chance encounter with Page and not part of his work for the FBI.

Investigators on Crossfire Hurricane met with Halper for the first time on Aug. 10, 2016 and asked him if he was willing to meet with and secretly record Page, an energy consultant who joined the Trump campaign in March 2016.

Halper agreed to help the FBI in the investigation, and met with Page at his home in Virginia on Aug. 20, 2016, according to the IG report.

Halper reached out to Papadopoulos on Sept. 1, 2016 under the guise of discussing an academic paper on energy issues in the Mediterranean Sea. Halper offered the Trump adviser $3,000 to meet in London to discuss writing the paper. The pair met on Sept. 15, 2016. Halper was accompanied by an undercover government agent who went by the name Azra Turk.

While he served as an FBI informant, Halper received more than $1 million in contracts from the Pentagon’s think tank, the Office of Net Assessment, to write policy papers  on geopolitical issues in China, India and Russia. Senate Republicans have questioned Halper’s relationship with ONA and its director, James Baker.

Halper has also come under scrutiny over his activities at Cambridge, where he developed close ties to Richard Dearlove, the former chief of MI6.

Halper and Dearlove co-convened the Cambridge Intelligence Seminar, which hosted current and former intelligence officials from the West and Russia.

An unidentified CHS provided information to the Crossfire Hurricane team regarding Michael Flynn’s visit to the seminar in February 2014, when he served as director of the Defense Intelligence Agency. According to an FBI memo recently released in Flynn’s legal case, the CHS told investigators that Flynn left the event with a Russian woman.

Svetlana Lokhova, who was a student at Cambridge, has said she believes she is the person in question, though she vehemently denies any improper contacts with Flynn.

Lokhova believes she is the person referenced in the Flynn memo because of news reports that appeared in The Wall Street Journal and The Guardian in March 2017 that said that American and British intelligence officials were concerned about her interactions with Flynn at the Cambridge event.

The FBI’s lead agent on the Flynn investigation wrote in a memo on Jan. 4, 2017 that he investigated the allegation about Flynn but found nothing to suggest any wrongdoing on the retired general’s part.

The FBI agent, William Barnett, told federal prosecutors last month that the information from the FBI source regarding Flynn was likely inaccurate.

“BARNETT found the idea FLYNN could leave an event, either by himself or [redacted] without the matter being noted as not plausible,” reads an FBI memo of an interview with Barnett on Sept. 17.

“With nothing to corroborate the story, BARNETT thought the information was not accurate.”

An attorney for Halper did not immediately respond to a request for comment.

Biden guilty of tax evasion? A new report indicates he owes hundreds of thousands to IRS

Freddie Mercury: Who did the Queen star write Love of My Life for? | Music | Entertainment