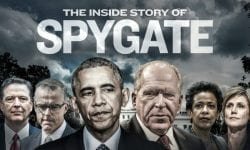 President Donald Trump is working to declassify documents related to the Russia investigation while he recovers from coronavirus at Walter Reed National Military Medical Center, his chief of staff said Monday.

“This morning we’ve already had a couple of discussions on items that he wants to get done,” Mark Meadows, the chief of staff, said in an interview on “Fox & Friends.”

“Candidly, he’s already tasked me with getting declassification rolling in a follow up to some of the requests that Devin Nunes and others have made.”

Trump went to Walter Reed on Friday after experiencing symptoms from coronavirus.

Meadows did not go into detail about the documents he is working to declassify or the timeline on which they will be released. The White House did not respond to a request for comment.

Nunes, the top Republican on the House Intelligence Committee, has called for the declassification of a variety of documents from the FBI and U.S. intelligence community related to the investigation of the Trump campaign’s possible links to Russia in 2016.

In a Fox News interview on Sunday, Nunes discussed two sets of documents he wants released to the American public.

He called for the release of memos from interviews that the FBI conducted with the primary source for dossier author Christopher Steele in January, February and May 2017.

The Senate Judiciary Committee released memos of interviews that the FBI conducted with the source, Igor Danchenko, in January 2017, but other interview transcripts have not been released.

An FBI memo declassified last month said that the bureau had investigated Danchenko in 2009 as a possible Russian agent.

Republicans investigating the origins of the Steele dossier have tried to figure out whether it is the product of Russian disinformation, or if parts of it were fabricated by Steele and others. The Clinton campaign and DNC hired Steele, a former MI6 officer, in June 2016 to investigate Trump’s possible links to Russia.

In the dossier, Steele alleged that the Kremlin had blackmail material on Trump and that the campaign was engaged in a “well-developed conspiracy of cooperation” with the Russian government to influence the election. The special counsel’s office debunked the conspiracy claim in a report released in April 2019.

Nunes also called for the release of intelligence underlying a memo that Director of National Intelligence John Ratcliffe sent to the Senate Judiciary Committee last week.

The memo said that U.S. intelligence agencies in July 2016 “obtained insight” into “Russian intelligence analysis” that said that Hillary Clinton had approved a plan to link Trump to Russia’s election-related computer hacks.

The underlying intelligence remains classified. Democrats have asserted that it has been debunked as Russian disinformation.

Ratcliffe said in his memo to Graham that the U.S. intelligence community has not determined if the intelligence is Russian disinformation.

Nunes, who was briefed by Ratcliffe last week along with other lawmakers, said the intelligence contained “smoking guns” that should be made public.

“From what I understand, there’s even more underlying evidence that backs up what Director Ratcliffe put out,” he said on Fox News.

“We want every damn bit of evidence that every intelligence agency has or it’s maybe time to shut those agencies down,” Nunes said.

Trump Working On Declassification Of Intel Documents From Hospital, Chief Of Staff Says is original content from Conservative Daily News – Where Americans go for news, current events and commentary they can trust – Conservative News Website for U.S. News, Political Cartoons and more.

Do you need to pay capital gains tax? Only if total gains exceed your annual CGT allowance | Personal Finance | Finance