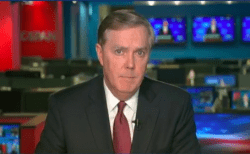 C-SPAN’s Steve Scully, who is scheduled to moderate the next presidential debate, formerly interned for 2020 presidential candidate Joe Biden.

The Commission on Presidential Debates announced in September that Scully, C-SPAN’s senior executive producer and political editor, would moderate the second presidential debate in early September. The debate is scheduled to take place October 15 in Miami, Florida.

Scully has been praised by comedian John Oliver as “the most patient man in television” for his calm demeanor. Scully hosts the C-SPAN show Washington Journal, where viewers may call in and ask any question they please, and has covered politics since 1991, Marie Claire reported.

“I grew up in a family with 12 brothers and sisters. So I have Rush Limbaugh and Rachel Maddow in my family,” he said in a 2017 interview. “So at Thanksgiving and at Christmas, you can imagine what the dinner conversation is like. I kind of apply that when I listen to the callers. We’re a town hall forum and this is what America is thinking.”

Scully, who did not immediately respond to a request for comment from the Daily Caller News Foundation, described his internships for both Biden and former Democratic Massachusetts Sen. Ted Kennedy in a 2011 interview with The Cable Center.

“I came to school in Washington, D.C., went to American University and had a couple of internships,” he said. “I worked for Joe Biden, senator from Delaware at the time, as an intern, so I had my first chance to really see politics up close in Washington, D.C.”

“I worked for Senator Kennedy,” he continued. “I was involved in his ill-fated campaign in 1980, which was interesting; having worked as a high school student in the Carter campaign in 1976, I saw from two different perspectives. I always knew I wanted to come back to Washington.”

Scully in March 2016 tweeted an anti-Trump column titled “No, Not Trump, Not Ever.”

“Donald Trump is epically unprepared to be president,” reads the New York Times opinion piece that Scully tweeted. “He has no realistic policies, no advisers, no capacity to learn.”

“His vast narcissism makes him a closed fortress. He doesn’t know what he doesn’t know and he’s uninterested in finding out. He insults the office Abraham Lincoln once occupied by running for it with less preparation than most of us would undertake to buy a sofa,” the piece continues.

Scully also posted a photo of himself with Biden in June 2016.

No, Not Trump, Not Ever https://t.co/PFvHTeQSZu

Gotta love the @VP at the Biden Beach Bash '16 pic.twitter.com/Z9gdC6Cmi1

Scully has previously interviewed Trump, and thanked the president in August for highlighting C-SPAN’s coverage at the Republican National Convention.

Thanks for the @C-SPAN shout out ⁦@realDonaldTrump⁩ ⁦@GOPconvention⁩ We ARE the one place for unfiltered coverage. Live. Uninterrupted. Gavel to Gavel. All week #RNC2020 pic.twitter.com/d2JZ5AvLbg