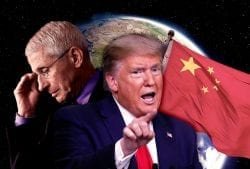 A federal judge on Thursday rejected the government’s efforts to further delay the release of select coronavirus-related communications between top U.S. officials, including Dr. Anthony Fauci, as part of a Daily Caller News Foundation lawsuit.

Judge Dabney L. Friedrich of the District of Columbia ruled on Sept. 21 that the Department of Health and Human Services (HHS) must begin releasing 300 responsive records per month beginning on Oct. 21. There are approximately 4,200 records relevant to the DCNF’s request for certain communications concerning the coronavirus, the World Health Organization (WHO) and China, meaning the release will not be completed until 2022.

“People have every right under the law to see the communications between our government agencies (including Dr. Fauci), China and the WHO at the outset of this pandemic that has killed so many Americans and destroyed our economy. We are happy that Judge Friedrich agreed with our position that the government should not be able to keep this information secret,” DCNF President Neil Patel said in a statement Thursday.

“However, the fact that the document production doesn’t have to start until over six months after our lawful request – and that the production will not finish until 2022, is a sad joke. It’s amazing people still wonder why the American people have lost trust in our national institutions,” Patel said.

The DCNF submitted the Freedom of Information Act request on March 26, asking for communications between National Institute of Allergy and Infectious Diseases Director Fauci, Deputy Director H. Clifford Lane and WHO officials concerning the novel coronavirus. The DCNF requested all relevant records between Jan. 1 and April 1.

Judicial Watch filed a federal lawsuit on on behalf of DCNF over the records release on May 4.

“The FOIA request at issue here concerns records that are likely to shed light on the China and WHO disinformation campaign on coronavirus—the stonewall seems calculated to undermine [President Donald Trump] and protect WHO and China.”

The DCNF records request also asked for communications between Fauci and Lane concerning the WHO, WHO Director-General Tedros Adhanom Ghebreyesus, WHO official Bruce Aylward and China.

HHS has repeatedly attempted to delay the records release. The agency argued in favor of releasing the records beginning on Nov. 30, weeks after the presidential election in which coronavirus is a main topic of concern for voters.

Fauci is a member of the White House Coronavirus Task Force. Aylward and Lane were both on the team of international scientists who traveled to China in February to inspect the country’s coronavirus response effort.

Meanwhile, China has been accused of being untruthful about the outbreak of coronavirus. Former Food and Drug Administration Commissioner Scott Gottlieb said in April that China “might have actually been able to contain [the virus] entirely” if it had been more truthful.

The consensus of U.S. intelligence agencies is that Chinese officials hid the outbreak in 2019.