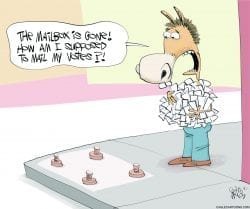 This will come as news to most voters, but we’re having a two–stage presidential election this year. The first stage is Tuesday, November 3rd. The plutocrats at JP Morgan warn Trump’s chances at that stage are improving and consequently advise clients to “position accordingly.”

I assume that means double down on investments in tear gas and fireworks manufacturers.

That’s because election day only serves to set a target threshold for the left. Once the count is over on Nov. 3rd the left knows exactly how many mail ballots will be required to produce a victory for Gropey Joe Biden.

Mendelsohn is only preparing Trump voters for the final letdown, “The reason we talk about a red mirage is in fact because we believe that on election night, we are going to see Donald Trump in a stronger position than the reality actually is …the data is going to show on election night an incredible victory for Donald Trump.”

A ‘victory’ that will be steadily eroded as mail ballots — or at least the mail ballots that are counted — turn decisively in Biden’s favor.

The Hawkfish prediction of the before–and–after Electoral College count is enough to empty gun stores of the few remaining boxes of ammunition still on the shelf.

Trump will have what appears to be an unassailable lead of 408 Electoral Votes to Biden’s 130. Magically, only seven days later, the count flips and now Biden wins 334 to 204.

I don’t think I’m alone in hearing the chattering wheels of cheatery at work.

Strangely, when I write the left intends to steal the election with a stamp, pushback is immediate from both thieves and victims. Many independents and Republicans mistakenly think the 128,838,342 votes cast in 2016 makes a presidential election is too big to steal. They’re confident that even if the left tries, it would take too many fraudulent votes to change the outcome.

That is a dangerous misconception.

The presidential election is really 50 individual elections. The left could inundate the polls with mimeographed ballots in New York, California, New Jersey, Illinois, Washington and Oregon and it would make no difference, because Trump was never going to win those states.

It’s swing or battleground states where the election will be stolen and Trump’s 2016 margin of victory in those states was whisker–thin. A New York Times analysis found a mere 107,000 votes nationwide “effectively decided the election.” That’s only 0.0008 percent of the total vote. A completely stealable number, particularly when vote counters have a couple of weeks to do it.

In 2016 Trump won Pennsylvania by 0.007 percent of the vote. He won Michigan by 0.002 percent. Wisconsin by 0.008 percent and Florida by 0.012 percent. The political apparatus in three of those four states is a solely–owned subsidiary of the Democrat Party. Pennsylvania, Michigan and Wisconsin have Democrat governors. In all three states the mayors of the three largest cities are all Democrat. That means the left controls the vote count machinery. Election judges are appointed by Democrat officials and trained by same. Republicans may be observers, but they won’t be in control.

We saw how this works in the 2008 election in Minnesota that inflicted Al Franken on us. Incumbent Sen. Norm Coleman led by 215 votes at the end of the official count. During the re–count ballots were ‘found’ in the trunk of a car and previously rejected ballots repented and were accepted. Even the ballots of voters in prison were counted, although that was illegal. In the end Franken ‘won’ by 225 votes.

Minnesota was a swing state Hillary won by only 0.016 percent and that was without riots. You can be sure enough mail ballots will arrive after election day to keep the state in Biden’s column.

This is why the lockdown is so important for the left. No school. No work. No return to normal. Fueling the Great Pandemic Panic is designed to frighten people. Frightened people won’t go to the polls and will instead vote by mail. This unprecedented, tsunami of mail ballots will swamp the system.

Ask yourself, why is the left adamantly in favor of a mail voting system that is so much more inefficient and slower than in–person voting?

Simple. In a vote–by–mail election it’s not who casts the votes that’s most important, it’s who counts the votes. And in too many battleground states the votes are going to be counted by the people who believe it’s morally unthinkable and their duty to prevent another Trump win.

Stealing an Election, the Slow–Motion Way is original content from Conservative Daily News – Where Americans go for news, current events and commentary they can trust – Conservative News Website for U.S. News, Political Cartoons and more.

NASA Makes History With First Helicopter Flight On Another Planet

The Diversity Industry Has Turned the Clock Back…to 1960

SafeMoon: New cryptocurrency value surges 130% – what is SafeMoon? Is it the new Dogecoin? | City & Business | Finance

All U.S. adults now eligible for COVID-19 vaccine: how to find a shot