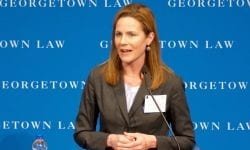 President Donald Trump reportedly met with Amy Coney Barrett Monday at the White House, ahead of his expected announcement on who will fill the Supreme Court vacancy.

Sources familiar with the meeting told multiple outlets, including Axios and USA Today, that the president met with Barrett Monday.

Barrett was appointed to the 7th Circuit Court of Appeals in 2017 and is one of three women that Trump is considering to replace former Supreme Court Justice Ruth Bader Ginsburg, who died Friday at the age of 87 due to complications of metastatic pancreatic cancer.

Barrett’s potential nomination to the Supreme Court to replace Ginsburg has alarmed Democratic lawmakers and abortion advocates who fear that adding Barrett to the bench may result in overturning Roe v. Wade.

“I’m saving her for Ginsburg,” Trump previously said of 48-year-old Barrett, according to a 2019 Axios report.