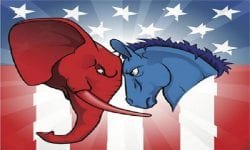 What is truly at stake this November? Forty-two days out, it is time all Americans examine this question. If President Trump wins a second term, but the House remains in the Democrats control and Republicans lose the US Senate – successful impeachment is a given. Under that same scenario with the variation that Republicans win the House but lose the Senate – the Democrats can block judges and keep Trump’s legislative agenda from becoming law.

A Democrat president, whomever that turns out to be, who kept the House and took back the Senate would fundamentally change the country as we know it. In the above scenario, in the event the House flipped to the Republicans, but the Senate fell into Democrat control, many aspects of complete transformation could still be achieved but to a lesser degree. Here is the short list of what is at stake:

Democrats seem to be busting at the seams with cash on hand. Biden is suspiciously flushed with cash as we wrote about here, and in the Senate races, Democrats are raising 25% more than their Republican counterparts. Again the sourcing of these funds remains to be a mystery as all Democrat donor funds are tracked through ActBlue, which sources from donations given to BLM and other social justice movements. The reality is Democrat candidates have the sources to blanket the airwaves and social media with a bombardment of negative advertising. The key vulnerable races are seeing massive out of state funding in an attempt to unseat incumbent Republicans.

Up until last Friday, most races were tied to local state issues. But all of that changed with the passing of Justice Ginsburg, and that event has nationalized the Senate races. Suddenly this is all about a referendum of #Filltheseat. Both sides are energized, and it will all come down to which side get more bodies to the polling places to vote and who can beat the fraud margins.

Here is a round-up of where the states in play are in the races for the U.S. Senate:

Presently Texas is a state Democrats would love to pick off, but incumbent John Cornyn holds an 8 point lead over challenger army combat veteran, and mom, M.J. Hager. The SCOTUS seat may provide Hager increased funding, so keep an eye on that race as we draw to a close.

Steals within grasp for Republicans to flip in the U.S. Senate:

Republican Challenger John James is a combat veteran and Businessman. Learn more here, and donate here. This race has been tightening as we draw closer to November. Currently, James is within 4 points of the incumbent.

Please also consider that Republican Senator and Chair of the Judiciary, Lindsey Graham, is being heavily targeted by progressives outside his state. His Challenger is Jaime Harrison, who is utilizing the progressive machine to raise boatloads of donations out of state. Presently the North Carolinian’s are being bombarded with negative Graham ads across all platforms. Donate to Graham here.

(But seriously, we’ve raised $500k today (!!!) Chip in to keep that momentum going tonight and to #SendLindseyHome) https://t.co/fKMazXXFbl

So how did your Monday start? Stand with me against the mob: https://t.co/5iOnCoCB4e pic.twitter.com/nZzz14ngr0

This is the election that will change your future. No matter your ideological comfort zone, the footing which we all stand has been shifted dramatically by extremism. Please take the time to watch the following video to grasp the significance of this moment in our history and the role you could play if you choose wisely.

Exercising our right to vote and self govern should not be about money. But the reality is one side is using out of state money to drown out the other side’s message. This needs to be addressed and changed gong forward, but today in the middle of a knife fight- we fight!  We know how tight economic resources are during the pandemic, and we are well aware of the sentiment regarding RINOs. But this is not the moment to sit it out.

Please donate to the GOP down-tickets both Senate and House if you are able to do so. This really is the cusp of not being able to get back to where we thought we all could always count on, being in America. Remember, VOTE Red on November 3, 2020.

Your Mission Should You Choose To Accept It: Vote Red To Save The Republic – Senate Round-Up is original content from Conservative Daily News – Where Americans go for news, current events and commentary they can trust – Conservative News Website for U.S. News, Political Cartoons and more.