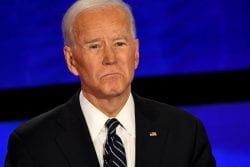 Democratic presidential candidate Joe Biden declined to say in an interview Monday whether he would supports adding seats to the Supreme Court, signaling a shift from the primary race when the former vice president said he opposed increasing the number of justices because Democrats would “live to rue the day.”

“It’s a legitimate question, but let me tell you why I’m not going answer that question,” Biden said in an interview with Wisconsin TV station WBAY when asked if he supports the concept of packing the Supreme Court.

Democrats have increasingly expressed support for legislation to add justices to the court if Republicans push through with a vote to confirm a justice to replace Ruth Bader Ginsburg, who died on Friday after a battle with cancer.

“It will shift the focus, that’s what [Trump] wants,” Biden said in defense of dodging the question on court packing.

“Let’s say I answer,” said Biden, “then the whole debate’s gonna be about what Biden said or didn’t say. Biden said he would or wouldn’t. The discussion should be about why [Trump] is moving in a direction that is totally inconsistent with what the founders wanted.”

“It is a fundamental breach of constitutional principle. It must stay on that and it shouldn’t happen,” Biden told WBAY.

“It’s a legitimate question, but let me tell you why I’m not going answer…it will shift the focus.”

“Let’s say I answer…then the whole debate’s gonna be about what Biden said or didn’t say.” pic.twitter.com/gvP6TCDPS8

During the primary last year, Biden repeatedly rebuffed calls from the progressive wing of the Democratic Party to support adding justices to the 9-judge Supreme Court.

“I’m not prepared to go on and try to pack the court, because we’ll live to rue that day,” the former vice president said in July 2019.

“I don’t think you can start to fool around with changing the structure of the Constitution legislatively,” Biden said at an event in Iowa in August 2019. “We tried the court-packing piece under Roosevelt. Even the Democrats opposed it at the time.”

‘Let me tell you why I’m not going answer’: Joe Biden Changes His Tune On Packing The Supreme Court is original content from Conservative Daily News – Where Americans go for news, current events and commentary they can trust – Conservative News Website for U.S. News, Political Cartoons and more.