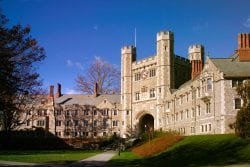 The Department of Education launched an investigation into Princeton University after its president declared that “racist assumptions” are “embedded in the structures” of the school itself, according to a department letter.

Princeton President Christopher L. Eisgruber’s acknowledgement of racism at the university raises concerns that its receipt of millions of dollars in federal funding violates Title VI of the Civil Rights Act of 1964, according to the Sept. 16 letter, which was sent to the school president and first published by the Washington Examiner.

“Based on its admitted racism, the U.S. Department of Education … is concerned Princeton’s nondiscrimination and equal opportunity assurances … from at least 2013 to the present may have been false,” the letter stated.

In response to the President of Princeton declaring the school to be racist, the Department of Education will investigate (educations that racially discriminate violate the 1964 Civil Rights Act) https://t.co/H3GbatsRk0

Eisgruber wrote in his Sept. 2 letter: “Racist assumptions from the past also remain embedded in structures of the University itself.”

“President Christopher L. Eisgruber has written to the University community to outline the next steps the University administration will take to address systemic racism at Princeton and beyond,” a header above the letter reads.

Princeton spokesman Ben Chang told the Daily Caller News Foundation: “It is unfortunate that the Department appears to believe that grappling honestly with the nation’s history and the current effects of systemic racism runs afoul of existing law.”

The Education Department wrote in its letter that it was concerned that “Princeton’s many nondiscrimination and equal opportunity claims to students, parents, and consumers … may have been false, misleading, and actionable substantial misrepresentations in violation” of the law.

“The Department is further concerned Princeton perhaps knew, or should have known, these assurances were false at the time they were made,” the letter continued.

Title VI prohibits recipients of federal funding from discriminating based on race or nation of origin.

“Princeton has long been committed to creating and maintaining a community where all can thrive, and stands by its representations to the Department and the public that it complies with all laws and regulations governing equal opportunity, non-discrimination and harassment,” Chang told the DCNF.

“This work is core to the University’s teaching and research mission, and we are vigilant in our pursuit of equity in every aspect of our programs and operations,” he continued. “The University also stands by our statements about the prevalence of systemic racism and our commitment to reckon with its continued effects, including the racial injustice and race-based inequities that persist throughout American society.”

As part of its investigation, the Education Department requested records related to Eisgruber’s letter. It also requested a “spreadsheet identifying each person who has, on the ground of race, color, or national origin, been excluded from participation in, been denied the benefits of, or been subjected to discrimination under any program or activity receiving Federal financial assistance as a result of the Princeton racism or ‘damage’ referenced in the President’s Letter,” the department’s letter stated.

The Education Department also demanded in its letter that Princeton provide Eisgruber for an interview under oath.