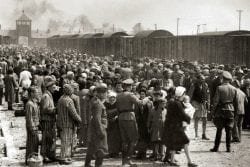 Nearly 20% of New York’s Millennials and Gen Z believe the Jewish people are to blame for The Holocaust, a nationwide survey released Wednesday found.

While The Holocaust resulted in over 11 million deaths, 36% of respondents under age 39 believed the total death count of Jews was “two million or fewer,” according to a nationwide survey of young people by the Conference on Jewish Material Claims Against Germany, also known as the Claims Conference.

Over 60% of respondents were unaware that six million Jews were murdered. Among those who were aware of the death toll, 48% were unable to name any of the 40,000 concentration camps or ghettos people were forced into during World War II.

Nearly half of Millennials and Gen Z had seen some form of Holocaust denial on social media, the survey found. In Nevada, 70% of respondents have encountered Nazi symbols either online or in their community, and an overwhelming majority of those surveyed, 80%, believe that Holocaust education should be taught in the classroom to help avoid a repeat of history.

On the day of reports that 2/3 of Americans are completely unaware that 6m Jews perished in the Holocaust, many don’t believe it happened, we see images of book burning on Twitter.
We must keep educating, reading and remembering. It will happen again.

“The results are both shocking and saddening and they underscore why we must act now while Holocaust survivors are still with us to voice their stories,” president of the Claims Conference, Gideon Taylor, said. “This needs to serve as a wake-up call to us all, and as a road map of where government officials need to act.”

The states which exhibited the least knowledge about the Holocaust among respondents included Alaska, Delaware, Maryland, New York, Georgia, Hawaii, Louisiana, Florida, Mississippi and Arkansas. Among the states recognized as most knowledgeable are Wisconsin, Minnesota and Massachusetts.

Gretchen Skidmore, director of education initiatives for the Levine Institute for Holocaust Education, called for improved Holocaust education in the classroom in a statement to the DCNF.

“There has to be a commitment on the local level to teach it; teachers need proper training; and there has to be sufficient time for preparation and classroom study of this complex history,” Skidmore said.

Almost 20% Of New York Millennials Blame Jews For The Holocaust is original content from Conservative Daily News – Where Americans go for news, current events and commentary they can trust – Conservative News Website for U.S. News, Political Cartoons and more.