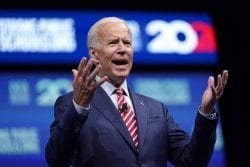 Former Vice President Joe Biden’s presidential campaign inadvertently allowed access to millions of Americans’ private information, including their home addresses, date of birth and gender, according to a security researcher.

A Biden campaign app, Vote Joe, allows people to upload their phone contact lists and see if friends and family are registered to vote ahead of the November election, TechCrunch reported Monday, citing research from mobile expert App Analyst. The app uploads and matches user contacts with voter data through a firm called TargetSmart.

The app displays a voter’s name, age and birthday, and which recent election they voted in when a match is discovered through TargetSmart, TechCrunch noted. The technique helps users “find people you know and encourage them to get involved,” according to the app. TargetSmart claims to have access to files on more than 191 million Americans, the report noted.

Biden’s campaign fixed the bug, according to Matt Hill, a spokesman for the former vice president.

“We were made aware about how our third-party app developer was providing additional fields of information from commercially available data that was not needed,” Hill told TechCrunch. “We worked with our vendor quickly to fix the issue and remove the information.”

He added, “We are committed to protecting the privacy of our staff, volunteers and supporters will always work with our vendors to do so.”

Hill disputed App Analyst’s contention that addresses and other private data could be collected, and a representative for TargetSmart told TechCrunch that a “limited amount of publicly or commercially available data” was made accessible to other people.

Much of this information is publicly available, though firms provide additional information through other sources to enrich data for campaigns. TargetSmart reportedly compiled voter data in 2017 on close to 600,000 voters in Alaska that was left on an exposed server without a password, ZDnet reported in 2017.

GSR’s app sold the data to Analytica, violating Facebook’s terms of use in the process. Analytica closed in 2018 after business dried up following the negative publicity.

The TechCrunch report comes after Microsoft reported on Sept. 11 that hackers from China and Russia tried to break into U.S. political campaigns, including those of the Biden and Trump campaign.